So have your version of Baron Blade with his Moon Beam go by “Lunatic” now, driven mad(der) by his success destroying the Moon!

I think we’re mixing up a Schmeese’s Cup of (Pseudo) Science and Magic. The werewolves’ curse is predicated on the full moon, right?

Lasers work by pumping energy into a material that is directly between two mirrors, one of which is partially transparent. The material, the “lasing medium,” has to emit light at some wavelength in response to the energy input. The other thing you need is to make sure that the mirror separation distance is an integer multiple of the wavelength. So, the lasing medium emits light, it bounces between the mirrors, and every time it goes through the gain medium there’s constructive interference, building a brighter and more coherent beam. (Plus stuff with Einstein coefficients.) You don’t have to build all the constructive interference, but it helps. There are variations with one mirror, for instance, or a fiber loop that just circles around. Eventually some of the light escapes out the partially transparent mirror, and that’s the beam that zaps out, pew pew.

I think you’ve just written the backstory of Alpha 2000! Werewolves with frikkin’ lasers!

Not to question your highly accurate Werewolf science, but what is the partially reflective mirror in this scenario? And what is the “beam” that is being projected? 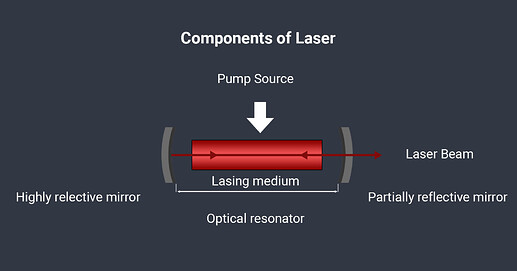 Not quite, what I am saying is that werewolves are frikkin’ lasers! Because SCIENCE!

@skywhale Yes, those are good questions… Maybe they aren’t emitting a beam. It’d be a real shame if a werewolf laser beam hit any passing cosmic entities…

I think we should all agree that for safety purposes one should never point a laser OR a werewolf at another person. Oh, and use protective eyewear when working with either.

This entire thread is reminding me of this XKCD “What If” article:
https://what-if.xkcd.com/141/

" If you were standing in the path of the beam, you would obviously die pretty quickly. You wouldn’t really die of anything, in the traditional sense. You would just stop being biology and start being physics."

So, I had a thought. Threre was a “cosmic dust storm” wrecking the world but enough plants, animals, and humans survived that it was not an extinction event.
It was Akashbuta, she flashed back to the dinosaur extinction event and used her energy to keep life on Earth.

Frost Bite yelling at Paul for going full on evil because of one little curse makes me think Setback would be one of the first vampires to join his faction. I also figure Pete’s luck +/- powers would also cause humans near him to “accidentally” die so he would have access to blood but not personally kill or make new vampires.

It was Akashbuta, she flashed back to the dinosaur extinction event and used her energy to keep life on Earth.

I can see Akash being in a situation similar to Poison Ivy back during the No Man’s Land arc in DC, where Ivy ended up taking over one of the bigger parks and turning it into a refuge for children.

So did C&A mention the fates of the Prime Wardens in Vampire World? Because I just had a thought about them. Ra and Fantatic are definitely not vamps, as I think even vampire Tachyon couldn’t survive getting close enough for long enough to bite them. Cosmic might have been off planet when stuff happened, or is trying to minimize the damage (which is also what Tempest is doing). But what if Argent Adept got bit and turned? What if the remaining Wardens had to team up with Akash, originally in a “enemy of my enemy” situation to take down Drake, and then kept together because they together are the last, best hope for getting Earth and life through this long night.

I mean, that sounds like a great concept for a fanfic, if you’re in the mood to do a bit of writing…

Most of my college years was spent doing crack crossover fanfiction on the old anime FFML. I’m sticking to my own stuff, these days.