EDIT: Due to the feedback in the comments below, I’ve decided to make a new poll that is anonymous and has three options. If you already voted in the first poll, please re-vote in this one.

Has Adam ever released art of it? I feel like I need to see a visual representation to judge for myself. There’s only so much you can get from an audio description.

I think the main thing that could make it silly would be if there’s actually a visible rocket-tail coming out of the bottom of the head as it blasts off.

In general I think of this as a parallel to the skull-ship of Brainiac; I would personally give the Progeny head a few dangling tentacles which wrap together into a more streamlined shape as the head flies off. That probably contradicts C&A’s vision a little, but if it was done subtly it wouldn’t be too difficult to keep it reasonable.

@Thunderbird, I think The Video Game has some art of it when you defeat Progeny. I don’t know if it’s by Adam, though.

I don’t have The Video Game, but I found this with Google: 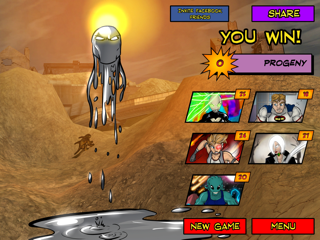 Relatedly, I still don’t think anyone’s ever answered Christopher & Adam’s prompt for fan-art of The Head. You artists should get on that.

I would call that more cool than lame. Those drippy ropes of liquid are what I meant about quasi-tentacles. I would have them writhe a little more in defiance of gravity, to allude to how the head is flying, but I can live with them being totally static and natural-looking as well.

Oh by the way, I imagine Progeny as an almost totally silent character, who occasionally makes a noise similar to “Grinder” of “The Plague” in the movie “Hobo With A Shotgun”. You can find clips of them on Youtube, but they are extremely 18+ and NSFW (due to over-the-top violence and gore).

I think The Video Game has some art of it when you defeat Progeny. I don’t know if it’s by Adam, though.

Except the 3D rendered backgrounds, all of the video game art was done by Adam.

Can I just say I really don’t like that this new forum software shows who voted what in the poll? <.< That seems to be a violation of unspoken internet social rules or something.

I haven’t messed with it at all, but there might be an “anonymous” setting for a poll? I would hope there would be, anyway…

There’s an option when making the poll you can check to show who voted for it.

Assuming that does work as it says, here is a second poll that isn’t supposed to show who voted what way.

Looks like your anonymous test worked, but it let me pick 2 options, hence 3 votes from 2 voters.

Oh, I’ve certainly seen the victory screen art at some point. Guess it’s been a while since I played vs. Progeny. I’d have to say I’m in the “cool” camp, even though it did make me laugh out loud!

I’m technically in the “Progeny’s flying head is both silly and awesome” category.

Yeah, I was wishing we had that as a third option…

The poll has been edited, everyone go revote!

I didn’t read carefully enough and accidentally voted wrong; there should be one fewer vote for “awesome and silly” and one more for “just awesome”.

You can click Show Vote and change your answer if you picked the wrong one.

Oh, nevermind; apparently the poll resequences the answers in order of how many votes they got, and I missed that my own vote was signified by a different color. I just assume that since I picked the top option, and then found the top option to not be what I voted for, that I must have done it wrong, but in fact I did not.

I’m technically in the “Progeny’s flying head is both silly and awesome” category.

I find this super legit.