A brand new hero. Let’s see if maybe they become one in DE. Could be one big joke since this was recorded on 4/1 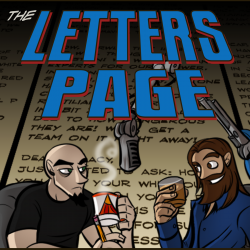 Let's take this podcast straight to hell! Er, to heck! Show Notes: Run Time: 1:25:36 We start off with some April Fools "pranks"? We recorded this episode on April 1st, so it seemed only right. But! We don't get too hung up on it, instead defaulting...

I feel like they’re talking about a deck with two character cards… Which would be AWESOME!

Also makes me think Tomb of the Bizarre is about as likely as Cosmic Tales for an expansion.

At least in my opinion, Tome of the Bizarre is a great expansion box name that can bring in anything remaining prior to the OblivAeon.

Like these characters. Has nothing to do with my tendency to play tiefling paladins in D&D/Pathfinder. Nothing to see here…

I’m sure each TLP episode has them doing some amount of reworks. But there is no way at this point they didn’t know what they’ve gotten themselves into.

Top-quality bit at the top of the show.

They’re really on fire today. On-brand for an episode about the realm of torment!

A toddler that just talks in death metal, great concept.

I’m really liking how different this story is from any other Sentinels hero.

Darn! I was going for lovers. :V

I really need to know how these names are spelled.

Okay, so the axe and stone make sense, but I’m confused about the string cheese. Is it also in the sandwich bag? Is this an entire bagged lunch we’re talking about? :V

Oh my GOD what was that ending XD

I really like the vibe of these characters, I feel like their stories could be a lot of fun. In particular, I like how their morality shifts as they spend more time together/get closer. It’d be fun to see a story (like the Expat/Setback one they covered a while ago) where one of them is going for the pragmatic but evil option, while the other brings the moral objections - but flipping those roles partway through, as the ensouled guy who grew up with demon’s can’t bring himself to actually do whatever, while Ms. Soulless is just like “I should probably feel bad about this, huh?”

On a related note…I can kind of see why these heroes are obscure enough that we haven’t heard of them before - one of them is an actual demon (with the moral, uh, freedom one might assume would go with that nature), and one of them is doing explicitly demonic sorcery. The people who didn’t like Spawn or Lucifer would have absolutely frothed about this one!

(Also, if their second or third story didn’t include a fight with other heroes, probably Nightmist or Fanatic, I’ll be stunned)

Yeah, at this point i feel like I can safely conclude that C&A have officially chosen to never answer any of my letters ever again. I wrote an amazing Avernus letter for the shipping episode, and they didn’t read it for either that episode or this one, so they must have just decided that they don’t like my face anymore, and are going to studiously ignore any questions I ask from now on.

That disappointment aside, this was a great episode, with a lot of really interesting stuff to key off of. The creative process that C&A does is a good example of raw chaos, like a child with a lump of Play-Doh; they go down a lot of rabbit trails that end up not being good, but they also generate lots of amazing story seeds that we can riff off of for our own purposes. I’m a little sad about the naming convention they settled upon, since it’s kind of intentionally bad in the 90s edgelord way, and that’s not a style that I’m a huge fan of, but it is fitting enough that I can’t argue at all.

Mechanically, I’m envisioning these guys as resembling a mix of two Cauldron heroes, Drift and the Wasteland promo versions of the Knight, where a deck built for one hero is instead used for two character cards (in that case the result isn’t amazing, but then the promo was an afterthought long after the original character came along). Since Drift is one of my low-key favorite Cauldron heroes, I very much look forward to a canonical hero who will function somewhat similarly. And the whole Critical Event mechanic feels like it was absolutely made to represent Aeternus, where there are so many different Lords of Hell who can take over temporarily, but the Critical Event might have the sentience of Aeturnus itself revealed. I think they could make two or three double-sided character cards with flip mechanics, where the game can either flip the current character or exchange it with a different one, so that various card effects can shuffle the current-ruler position in all sorts of weird ways. Maybe the normal game has only one continuous ruler, but the advanced version represents a power struggle where the characters continually flip or switch in a largely random order. If this isn’t how the DE version turns out, then I will almost certainly homebrew a villain deck around this concept, assuming I have time to do so.

Yeah, at this point i feel like I can safely conclude that C&A have officially chosen to never answer any of my letters ever again. I wrote an amazing Avernus letter for the shipping episode, and they didn’t read it for either that episode or this one, so they must have just decided that they don’t like my face anymore, and are going to studiously ignore any questions I ask from now on.

I wouldn’t take it too personally. I’ve had my share of letters never read.

well personal or not, it seems pointless to try and write any more in, when the ones I already think are the best haven’t been getting through.

(Also, if their second or third story didn’t include a fight with other heroes, probably Nightmist or Fanatic, I’ll be stunned)

Fanatic. I can see an interesting story where the two of them are going through a slightly more antagonistic phase, and Fantatic comes into the picture having to help the demon stop the sorcerer’s plan.

I feel like they’re talking about a deck with two character cards… Which would be AWESOME!

Also makes me think Tomb of the Bizarre is about as likely as Cosmic Tales for an expansion.

Yeah, I’m very curious about whether we’re going to see them as a deck, or whether the new hero decks for the next few years have already been nailed down and we won’t see them until the faraway days of a magic-based RPG book. I’d be up for a second hero deck that’s multiple people, to go with the Sentinels.

Neat pair, and I think they deserve some more screen time!

I’m also in the camp of “the decks are locked in for all expansions (minus playtest tweaks).” Likely RPG filler, possible deck art cameos, at best I can see them as an Environment Deck card(s).

I’d agree they have it planned out who is in each box. So if this character was planned for one of them, then they already had been slotted in before this episode.

It seems like typically if something would have no chance of showing up in the card game, they go out of their way to answer, 'Why isn’t this in the card game?" They didn’t really do that for these two, but rather “Why haven’t they interacted much with the other heroes?”

I’ll note that as a playtester I was aware Alpha would be a character months before we got the creative process episode that introduced her.

Interesting, but counter example that Adam seemed genuinely in the dark as to what their powers would be. If they had already planned to make a deck(s), that seems unlikely.

Adam has in the past forgotten prior discussions. So it’s not out of the realm of possibility similar happened here or this was the first time they decided yo flesh it out further. Last week we got more background on Tantrum than either one of them had really done until that point despite her being in the EE Vengeance box.

It may not happen but I can’t discount it as a possibility just yet.

At this point, I’m just assuming any new character introduced in the LP will show up in the card game in some fashion (heh), with or without their own deck.