How Many Minions Does An Environment Create?

As part of my continuing to get my brain around this game in preparation for designing my own campaigns, I’ve been building environments, and I’ve run into something a little odd.

The section on construction environments suggests that, in the Green Zone, a good minor twist is to create a single minion, whereas a good major twist is to add (Min Die) minions or a single minion with an extra effect on them. However, every published environment outside of the starter set I can find that generates minions generates a lot more than that. I’m not including “Off The Rails”, because I can’t buy it just as a PDF which means I can’t buy it, but for everything else (minor environment spoilers for the starter set and Urban Infestation):

So I guess my question is - does anyone know if the suggestions for environments changed, or if it’s just that most of the published ones are being variable in a fairly specific way? If it was just one or two I’d chalk it up to “environments are highly variable”, but it’s every one since the core, including the core.

Generally, the severity of twists escalates dramatically from green to red, but also has a lot of variance, from ‘purely narrative effect’ to outright scene-breaking doomsday twists meant to be introduced one or two turns before time’s up…

There’s so many things all over the place with that construction set (including what seems like a cut/paste error between Minor and Major red twists) I’d wager the best way to date is testing the waters it with your group, and adjusting on the fly.
Anyway, MID Minions is anything between 1 and 8 in the extremes, so (H) seems a more predictable approach unless you want the element of uncertainty for dramatic reasons.

I tend to have some variety prepped, and then wing it depending on how the scene goes for the heroes.

I felt like I probably shouldn’t leave that here without explanation.

I stumbled across this when I found that, for GM preparation, I preferred to sort the table not by effect type but by GYRO level, and thus copied them all into an excel sheet.

What I am referring to is p. 244, Environment Basic Actions.
Notice how the red minor twists box is somewhat crowded, while the corresponding red major twist box is suspiciously empty?

If you then take a look at the last 2 entries for those minor twists (‘All targets’), they obviously follow an escalation pattern that started with the green and yellow major twists… thus my guess is that those entries would actually belong into the major twists box.

One might of course argue that they broke the pattern on purpose, but then you’d be getting some really out-of-place level harsh ‘minor’ twists there, that (considering the scene has run to red) is likely to decimate the group. That’s more on par with what other suggestions for major twists are given, not minors.

If you then take a look at the last 2 entries for those minor twists (‘All targets’), they obviously follow an escalation pattern that started with the green and yellow major twists… thus my guess is that those entries would actually belong into the major twists box.

I’m not sure what version of the rulebook you’re looking at, but the one I have says, in the Major Twists cell:

The first two of which are logical extensions of the Major Twists of the previous categories.

I’m not sure what version of the rulebook you’re looking at, but the one I have says, in the Major Twists cell:

Actually I said look at the Minor Twists … 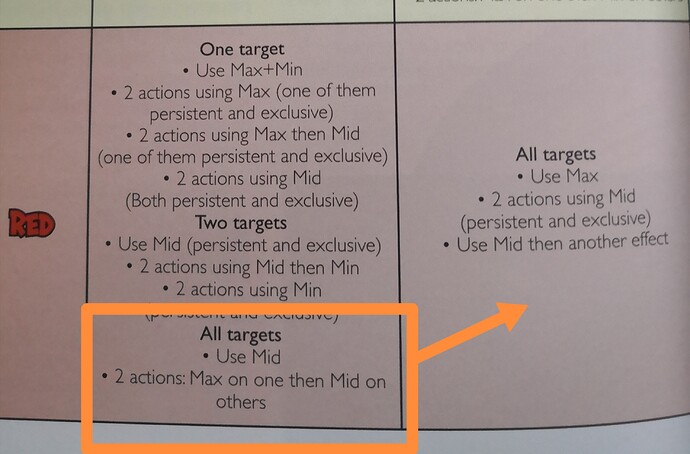 oh wait… it’s not the last two entries, just the very last. Sorry for that.

You’re right, that one does look like it’s in the wrong column. Especially since it’s strictly stronger than “Two targets: 2 actions using Mid then Min.”

I quoted those since you said the Majors box was empty.

since there should be another Publisher’s note with Dave Chalker soon-ish will someone ask about this issue?

Those on the discord can try but I’d say submit questions to this form as well The Letters Page!

My questions tend to vanish into the ether, but I’ll give it a shot!