Nature comes alive in the next chapter of Spirit Island.

From Greater Than Games - Nature comes alive in the next chapter of Spirit Island.

Okay, so what does everyone speculate will be in this expansion, and what do you hope will be in it?

I definitely want Aspects for non-Low Complexity Spirits. Also, more than one

-focused Spirits would be nice, as well as a primarily

-focused one. (Volcano, Unyielding Defiance, and Lure all use

, but not as their primary shtick.)

And perhaps we’ll finally get the long-wanted

FWIW, I at least think of Unyielding Defiance as the

spirit. There are also a few spirits that could fit the bill of

-removing, like Wildfire; but of course none of them do that primarily because they’d have nothing to do for large swaths of the game.

Maybe they will take another crack at the support spirit: one that doesn’t take much direct action itself, but enables and empowers the other spirits.

Honestly, I feel like I’ve barely scratched the surface of the last (huge!) expansion, and there’s plenty of stuff from the base game I haven’t played. There are So. Many. Combinations. in my box right now that I am planning to wait and see what this one brings, and maybe just sit it out.

FWIW, I at least think of Unyielding Defiance as the

Me too. Of all the currently existing Spirits, Defiance is definitely the

-iest. But still, (in my opinion) its main gimmick is retaliation, not

-removing, like Wildfire; but of course none of them do that primarily because they’d have nothing to do for large swaths of the game.

I know; I only mentioned a

-removing Spirit because I remember a forumite (@ras906) expressing interest in one.

Maybe they will take another crack at the support spirit: one that doesn’t take much direct action itself, but enables and empowers the other spirits.

Honestly, I feel like I’ve barely scratched the surface of the last (huge!) expansion, and there’s plenty of stuff from the base game I haven’t played. There are So. Many. Combinations. in my box right now

Yeah, me too. I don’t think I’ve played any of the JE Spirits more than twice. And I am yet to try Starlight, Finder, Downpour, or most of the Aspects yet at all. : )

I think most of us are pretty content with what we’ve got thus far, but GTG thinks we need more stuff, and, honestly, if they make Nature Incarnate cool enough, well, I know I’ll get it eventually.

Since I’ve last checked the expansion’s Backerkit page, it appears that they have added an image to it: 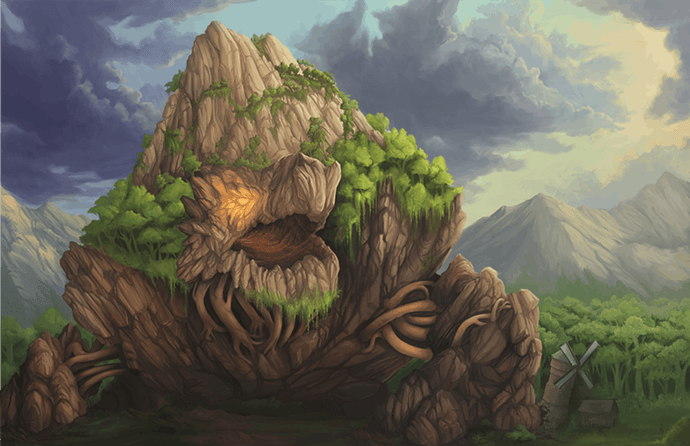 , but when it did, it could take

(!) with it, because it is literally carrying them on its back.

Also, didn’t Eric say in a Kickstarter update that he thought about making a Spirit that could only act in the Slow Phase, but ultimately scrapped that idea? This lumbering giant might be that Spirit . . .

The afore-linked Backerkit page also says, “There are things yet unseen among the deepest roots of the land, and they now rise to meet the coming white sails.” That, to me, definitely brings to mind Serpent Slumbering Beneath the Island. And the Backerkit page also mentioned “new aspects,” so maybe there’ll be an Aspect or two for ol’ sleepyhead, and/or some of the other land-based Spirits (i.e, Unyielding Defiance, Volcano, Forgotten Memories, Keeper, Lure). But, then again, an Aspect for a High Complexity Spirit does seem fairly unlikely.

Additionally, with this expansion’s obvious focus on nature, I’d wager that there will not be any

-focused Spirits in it, due to humans generally being considered not part of nature.

Any thoughts on if Spreading Rot gets made official here?

Hmm, Spreading Rot Renews the Earth? I dunno. Based on what Eric has said, there doesn’t seem to be any indication one way or another. However, Nature Incarnate does seem like the most likely expansion that we currently know about for Spreading Rot to be in. The Dahan expansion and Horizons both seem fairly unlikely (for obvious reasons). Plus the fact that, well, the Spirit does seem to thematically resonate with Nature Incarnate.

After thinking about it for a bit, I wager that, if Spreading Rot does make it into an expansion, it’s Rot mechanic will almost certainly be heavily modified.

As it currently is, it’s just an extra resource to track, that — in my opinion — does not really add anything to the Spirit. Personally, I would remove the Rot mechanic entirely, and replace it with either Energy, Elements, or

in the Spirit’s lands. Spirit Island already has plenty of resources to work with. For example, Bodies Feed the Earth could read,

are destroyed in one of your lands, add 1

Next thing to ponder: Will we finally see the use of that twisted vine icon from the thematic board?

It’s certainly a possibility. On the one hand, I recall Eric expressing the desire for Nature Incarnate to not include any new rules, so that would preclude that token. He could have changed his mind since, of course. On the other hand, Nature Incarnate does seem to be a perfect thematic fit for such a token.

What would this new token actually do? From what little rumors I’ve heard, they are called Vitality tokens, and have something to do with strengthening the vitality of the land. Mechanically, I’d guess that they would do something similar to one of the following:

I like the idea of a reverse Badlands. Or perhaps it could do something like stopping Blight cascades in that land?

Backerkit says that this expansion will contain “new aspects.” But the question remains, new Aspects for whom?

It seems very unlikely to me that it will have Aspects for the existing Low Complexity Spirits, as they already have 2-4 each while everyone else has none.

However, my attention is brought to another query: will Spirit Island have Aspects in a box for Spirits in a different box? Or will a Spirit only get Aspects in the box that they come in? (With the Core Game Spirits being the exception, of course.) The latter method would mimic what Sentinels Definitive Edition is doing with Hero Variants.

Of course, if that’s true, that means that the Spirits from both Promo Packs, Branch & Claw, and Jagged Earth will all never get any Aspects. I could, though, be overestimating the number of Aspects that Eric intends to produce, so maybe it will be not unusual for those Spirits to lack them.

Then again, Horizons might throw a spanner into all this. With Horizons, there will now be two “base games,” so GTG can’t be assured that any given Spirit Island player owns any product. So the designers can’t assume that players will have even the Core Game Spirits.

I personally am hoping for Aspects for Horizons in Nature Incarnate.

That would be cool, @Godai. Especially since the Horizons Spirits are likely to lack some of the more advanced rules — namely those introduced in B&C and JE (the tokens and

come to mind) — and Aspects could allow them to use said rules. (Similar to how Shadows Flicker Like Flame and Lightning’s Swift Strike got Aspects in Jagged Earth that let them use

If so, then someone who just buys NI without buying JE would have useless Aspects for Spirits they don’t own.

Eric said in the Kindred Spirit Podcast (briefly) that the intent is that JE will be required for all main SI products going forward.

, Events, and Aspects. (Did I miss anything?) All of those except

, and Aspects were also present in Branch & Claw, though.

So, I suppose that what Eric meant was that all future Spirit Island products (likely including Nature Incarnate and excluding Horizons) will use tokens/

I suppose that I can see the logic behind this: he doesn’t want folks who buy all of the expansions to have an inordinate amount of extra tokens.

But on the other hand, I can also see that this might seem annoying to people who just want to pick up one of the (hypothetical) post-JE expansions and be unable to play some of the Spirits because they didn’t buy this mega-expansion.

Also, this has speculative ramifications. This seems to imply that the Core Game + Jagged Earth will basically contain all the rules that the game will ever have. So this implies that Vitality Tokens (if they end up existing), and whatever

weirdness we might get in the Dahan Expansion are going to stay in their respective boxes.

Also, I suppose that this does mean that there is the possibility of JE Spirits getting Aspects in future products. The Branch & Claw and Promo Spirits still don’t seem likely, though.

This seems to imply that the Core Game + Jagged Earth will basically contain all the rules that the game will ever have.

That is definitely not true. I think we can expect that most “special rules” will stay in their own box, but, for instance, the Dahan Expansion will have a whole new suite of rules. And I would expect there to be Dahan Expansion expansions that require the core box, JE, and the Dahan expansion.

So this implies that Vitality Tokens (if they end up existing), and whatever

weirdness we might get in the Dahan Expansion are going to stay in their respective boxes.

I’ve noticed that the Wiki page for this expansion states that it will contain eight spirits. Where was this revealed?

Might have been the State of GTG panel at Gen Con? They talked about some of the details there, but I don’t remember specifics.