Weekly One Shot #312: Twenty Thousand Legions Under the Sea

Ultimate Voss has decided to invade Earth through the Ruins of Atlantis. Tempest has infiltrated the operation by being captured, but can his allies Termi-Nation Bunker, X-Treme Fanatic. and Grandpa Legacy save him before he gets Gene-Bound?

This one was rough for me for some reason. Fine after 2 close losses, one to heroes going down and one to having 10 minions out (which is the first time I unintentionally lost to that I think). 3rd game won with Tempest and Fanatic down and Bunker at ~15 and Legs at 8. Bunker was so much higher due to Legacy getting all the power uses and healing Bunker.

I don’t want to give too much away, but it really depends on when/how you flip him. Too early and he plays too many cards, too late and you’re not doing any damage through his minions. If you do it right, you can get both early Forced Deployments with one Ball Lightning, but the third one late in his deck is brutal.

First game I survived the massive minion damage but then couldn’t get rid of enough to not lose to his ability, second game I just didn’t survive the damage. Third game I survived with the two heroes and enough damage to get most of the minions down so I could finish Voss the next round, but not by much.

Also, I am still not sure if it is worth keeping out the Luminescent Chamber(s) or not. Extra healing and damage, but no cards to play…

I could’ve sworn there was already a thread for this. c.c

Anyway, I recall I got a Near Mint because of a major blunder in the first game. Ultimate Voss really isn’t that bad, especially when he flips, and you start out with the right tool kit to get him there.

Minted losing no heroes. Spent the majority of time setting up and preparing to flip Voss. Ended up flipping him right after Legacy played a Take Down, which curbed his incessant card plays for a bit.

Because I was playing it slowly/cautiously, eventually the environment played The Pillars of Hercules which funnily enough spelled Voss’s Doom. I kept it in play seeing as since by this point Voss only had maybe 5 cards left in his deck. So even though there was 1 forced deployment still to come, by the time it got to his turn, his trash had been reshuffled back in. No minions for him and double the amount of powers, card plays and draws for me.

Legacy playing a 2nd Take Down whilst the Pillars were up was all it took to get the decisive victory. 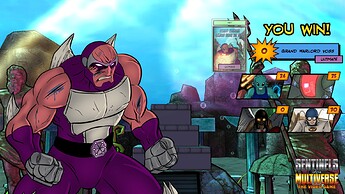 Okay, got it with one down! Fanatic was always the lowest and didn’t really stand much chance once Voss had flipped. She was still able to get rid of the final Forced Deployment with her incap power after Tempest tossed it back on top of the deck. I don’t think Voss even lasted another round after that, though. He was the last to escape and therefore the first one crushed by the collapsing hallway!

Second time was the charm; I played almost the same as the first time, with minimal foreknowledge, and instead of just barely losing the damage race, I won with a fairly comfortable margin. In both cases, my main strategy was to push Resolute to the limit with Gung-ho, resulting in a topdecked Wrathful Retribution for 25 or so to Voss’s exposed face, after which Forced Deployment resolved and Fanatic died.

Both times also had Legacy as the second casualty, but the big swing between the two games was that in the first, he was too beat up to survive a Heroic Interception, while in the second he managed to Intercept the damage of the Stalwart before being taken out by a Bionaut. The one thing that went better in the first game was that I used the Kraken to pick off some secondary targets, but eventually it ran out of food and helped off Fanatic, while in this one she “wasted” a Consecrated Ground to take it out after being hit once.

And in both games, my late game strategy was just about giving Tempest the Shackles and leaving out a Phosphorescent Chamber, so he could deal 5 damage to Voss with a power usage even if a Minion was in play. With both Fanatic and Legacy granting extra powers, Voss didn’t last very long. In game 1 he managed to take out Bunker, who wasn’t helpful enough to let Tempest close the gap before dying; the second try saw both survive, giving me my Near Mint.

I could’ve sworn there was already a thread for this.

Whereas I failed to find it in the list of Latest topics, despite knowing it existed.