Ultimate Akash’Bhuta is on the loose within The Celestial Tribunal and it’s the perfect opportunity to see how far The Adamant Sentinels have come with their training.

Leading a team that consists of Super-Scientific Tachyon, Xtreme Argent Adept, Akash’Thriya and Captain Cosmic, can the Adamant Sentinels put a stop to the ultimate form of Mother Nature herself? 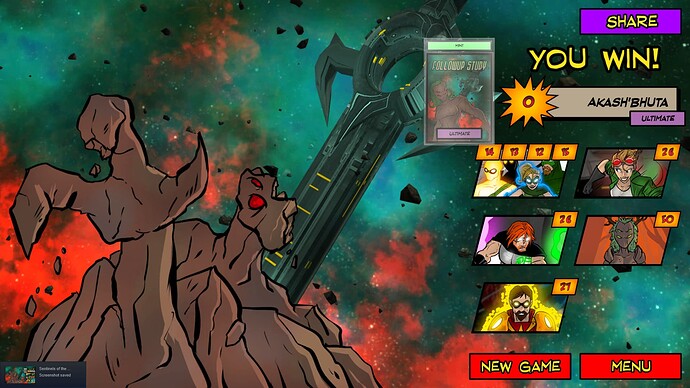 An easy mint but the match seemed to draw on for quite a long time. Ended with every hero at full HP, thanks to the MVP match of the match Mainstay.

Akash’Flora granting every hero a free power use every round with no negative drawbacks, thanks to Mainstay, helped a lot in the match. Combining that with Character Witness, choosing Grampa Legacy as the Representative of Earth and the mere presence of Argent Adept on the team meant there were many powers being used and sped up a match that otherwise would have taken even longer.

Really my main concern was keeping enough ongoings in play to stop Earth’s Sacrifice from ruining my day. Which proved to be a really easy task with the hero setup provided. Not the most fun one-shot I’ve played, but sometimes a stress-free Mint is fun in its own way.

Also easy mint, though I figured 25+ hp was good enough for everyone who could get that high and went with Base Legacy as the Judgement just to get a little extra damage output to speed up the game.

Also, with that many power uses, Idealist should be able to completely neuter Bhuta’s damage on her flip side so you can keep her there to remove the damage reduction.

I wouldn’t call this either easy or stress-free by any stretch of the imagination; I don’t think I’ve ever worked harder for a Mint. It didn’t help that I’m still having a glitch that freezes the game sometimes, forcing me to go back to the main menu and Continue, which Continues from the previous start-of-turn; this meant I had to replay a lot of extremely long Akash’Thriya start phases (although on the plus side, it meant I got to sort of Undo several times and revise my fiddling until I got the best result). So this took literally two hours to play through, but I finally managed to bring her down. She was definitely nowhere near her meanest in this match (see the old weekly with her in the Block, #59, for a counter-example); it seemed like the Executioners always came out when she was on her flipside and died when she was back on side one, so she didn’t get any bonus plays out of it (although I was sort of hoping she’d play an Entomb during the environment phase of the turn when I had her double-Strangling-Rooted and TK Thumped, so that she would entirely fail to do any damage).

While one of the Sentinels went down for a second during a particularly bad onslaught of Living Rockslides right after her first flip, it didn’t take long to bounce back from the low single digits and end the game with everyone in the mid-teens. My play experience was pretty similar to that of KingofallLondinium, except that I don’t have Grandpa Legacy unlocked, so instead I went with the hero I just sat down and intentionally got myself just a couple days ago, Requital Captain Cosmic. Telling the Sentinels to play their top three cards is definitely fun.

I’d have to say that this match has definitely cemented my belief that Akash’Thriya should be considered an honorary Southwest Sentinel. The combination you can pull off between her and Mainstay, Medico, and/or Adamant Idealist, giving you an insane number of extra powers at very little cost, is just an amazing way of solving near-unsolvable problems, assuming you live long enough to get the setup done (and don’t lose it all to a That Card-type effect). Since I’m still not even trying to Mint any Oblivaeon weeklies that may come up - he’s still very much a “sometimes food” in my book, not worth tackling more than once every month or three - this is probably the hardest battle I’m ever going to have any hope of Minting; I’m tremendously thankful that if I had to sit and tap furiously at my phone screen for two solid hours, I got to do it in my single-favorite environment, music-wise (and it remains so even after having heard it almost non-stop for that length of time, though I came close to burning out on it toward the apparent midpoint of the match, before I started to gain enough momentum to make the second half a lot shorter).

A long game (that I was playing while playing a completely different game with physical cards!), but a Mint. So much synergy potential with this team, even when I screwed up.

It took a little time, but once Mainstay started acting as Human Shield, fully armored up with Durasteel Chains and Energy Bracers, nothing Akash’bhuta threw at the heroes could do any damage, and I largely disregarded the primeval limbs. I did make an oddball, but successful (and sort of thematic, now that i think about it) choice for Representative of Earth - Akash’Thriya SotV got the Primordial Seeds attacking for 2HP each multiple times per round. The Sentinels had their entire deck in hand by the endgame, and with help from AA, Mainstay was hitting with multiple 8HP Coordinated Assaults. Tachyon got off a couple of Lightspeed Barrages, and helped the Sentinels play all the cards, while AA did what he does best, helping everyone else do more of everything. 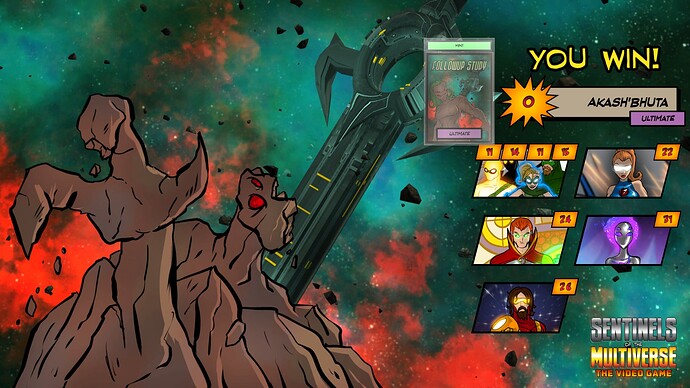 What the heck kinda game did I play?!

Some shenanigans with Completionist Guise as the Representative of Earth since I knew it was going to be a drawn out game!

It’s not represented on the victory screen, but Tachyon was Team Leader at some point while Captain Cosmic was in Requital form. The Sentinels ended up split, with regular Writhe and Dr. Medico while Mainstay and the Idealist kept their Fort Adamant costumes. I guess the team graphic can only show them all as the same variant, though.

Now that’s a creative use of Representative Of Earth - I’ll bet the Celestial Tribunal never knew what hit them!

If only Judge Mental had been there to see it.

I’m sure Guise was throwing out court references left and right! I can just picture a mashup of My Cousin Vinny, A Few Good Men, To Kill a Mockingbird, Twelve Angry Men, Judge Judy - the list goes on and on! Talk about a mockery of justice!

It was a pretty fun, albeit long game. I considered destroying Representative of Earth at some point just to cycle back around to it and pick a different hero, maybe GI Bunker to get rid of the annoying damage resistance. It had already been about two hours at that point, so I thought I’d go ahead rest my case so the jury wouldn’t have to sequester any longer.

I’m sure Guise was throwing out court references left and right! I can just picture a mashup of My Cousin Vinny, A Few Good Men, To Kill a Mockingbird, Twelve Angry Men, Judge Judy - the list goes on and on! Talk about a mockery of justice!

Don’t forget Phoenix Wright, Ace Attorney! I can picture Wright in the Tribunal and thinking “Man, these machines are better judges than that one guy…”

I’m paranoid about letting Representative of Earth sit out for any length of time, just because it’s too easy to be like “Representative takes 1… okay, not big deal… Representative takes 2… alright, we can handle that… suddenly out of nowhere Representative takes 3+4 and that’s game”. As slow as Abby is, she’s not predictable, and the risk of her getting a bonus environment play, which ends up being Primeval Eruption for a bunch of Limbs, plus an instant Entomb, and the limbs make her flip so she deals damage innately…it just has too much potential to go horribly wrong and cause an instant loss. So I never let Representative stay out longer than I can avoid.

But if you take away that, the Tribunal is just full of bad stuff! I felt like I was pretty safe anyway. Had Meat Shield, er Mainstay, with his Chains and one or two Energy Bracers. I gave Dr. Medico a Cosmic Weapon so he could swipe at Idealist and use Hippocratic Oath to turn that into 4 HP healing for whoever needed it.

Only once did the Chains and some Instruments get destroyed, and they were back soon enough since the Sentinels held their entire deck thanks to F6 Tachyon. Requital CC topdecked a Construct Cataclysm and blew up his Energy Bracers, but they came back out thanks to Unflagging Animation.

I guess if I was really worried about the Representative being convicted, I could’ve just had Tachyon blow up the environment card and declare a mistrial.

But if you take away that, the Tribunal is just full of bad stuff!

True, but most of the bad stuff is slow to happen, giving you a chance to deal with it. RoE is the main thing which can just suddenly put you in a bad state; Called to Judgment lets you use the power once, but then you get a reshuffle, and the Representative remains there, no longer doing anything good for you (unless you have the Akash’Flora loop set up, in which case you get to use the power every round, and that might be worth the risk), but still putting you in danger just by its existence. In general, unless the number of environment-destruction effects you have available is very limited, I would rather get rid of RoE instead of taking chances. The only card that’s really more of a “destroy this now” effect in the Tribunal is the Celestial Chamber, which makes the Executioners keep coming back from the dead; if you only have a couple of environment-destroy cards in the party, it’s worth saving them for that, but if you have a third, you should usually take the Representative off the board before anything can happen to them.

I felt like I was pretty safe anyway. Had Meat Shield, er Mainstay, with his Chains and one or two Energy Bracers.

I do feel kinda dumb for not noticing that combo; I’m so used to things damaging all hero targets including the Bracers themselves, making them too fragile to count for much, but this is indeed a way around that. I could have saved myself some effort TK Thumping my own Tree at the start of Thriya’s turn, letting Mainstay and his Chains soak all the rest of Flora’s self-damage, if I had noticed this much simpler solution.

I gave Dr. Medico a Cosmic Weapon so he could swipe at Idealist and use Hippocratic Oath to turn that into 4 HP healing for whoever needed it.

I guess if I was really worried about the Representative being convicted, I could’ve just had Tachyon blow up the environment card and declare a mistrial.

I think I only ever drew one Blinding Speed, so I used that on the Representative. Fortunately I don’t think the Chambers ever came out.

Someone has the numbers off, this was #313. Which may become apparent for this week.