Anyway, Warfang has abducted the heroes into the Time cataclysm to have the greatest Bloodsworn show across multiple locations and times, AT THE SAME TIME! Distant Fan Cheering

Can Akash of the Void, Prime Warden Argent Adept, The Sentinels, Best of Times Chrono-Ranger, and Super Sentai Idealist put on the greatest show of all time and space?

Mint by too close a margin for my liking, Heroes at 20 and Warfang at 19 favor and all heroes high teens.

Kaargra flips right away, so I focus fired her down to the exclusion of everything else. This let her build up favor uncomfortably quickly, but a Fickle Fans brought things to a more even footing. Beyond that, this one was over before people could get too set up. After she flipped back, The Sentinels + Idealist did most of the beating down of the other Bloodsworn. Funnily enough, the heroes got their 20th Favor by Akash destroying a Tumbleweed…

Note: Careful with the Seeds this game, as any destroyed by the villains give them favor points!

I managed a Near-Mint; the first time, I made the cardinal error in any Bloodsworn game and let my Favor end a round one point higher than Kaagra’s, at which point a Fickle Fans pushed her from 13 to 18 and then she picked up the two points she needed to win.

My usual trick when she starts the game in play is to beat her up moderately, get my Favor high, and then flip her and get to 20 in the same round. On my second try, that went perfectly. There’s a lot of damage reduction on the board for this team, which is extremely useful. Careful management of HP kept Akash’Flora with the lowest health so that Ashclaw would punch it, giving me a free round of hero powers, and Chrono-Ranger was able to stack bounties on Kaagra and then use them to deal with particularly troublesome gladiators.

I never saw Akash’Flora, so our games must have been different due to shuffling. Fickle Fans was my plan as usual for when Kaargra starts out ahead, and things mostly went more or less as expected…except at the end, where Thriya decided to play two Environment cards, and they were Crushing Hallway and Fixed Point. That was bad enough, but thanks to careless handling of Mindbreaker Tarnis so he got The Indiscriminate, and my failing to realize that Fixed Point would make Kaargra extra-Unbreakable, I was about to lose on the Environment turn and so quickly Undid, whereupon I frantically scrabbled to stop the villains from getting more than 2 favor during the villain turn.

Idesa the Adroit would have been an auto-loss, except that Chaos Lord Thriya got exactly the right card when Kaargra punched her for 5, going to 18 favor. That card was Instantaneous Maturation, so Thriya dealt herself 2 more damage, taking The Unbreakable out of Kaargra’s toolkit, and playing Strangling Roots to neuter Kaargra, Tarnis and Idesa. Kaargra hit a second hero for 2 to hit 19 favor, but no other Gladiator distinguished themself, so the heroes got their turns and were easily able to finish Kaargra off.

I was amazed at how much having Primordial Seeds in a Kaargra fight changes up the strategy.

Because, yeah, a lot of times they’ll get wrecked, but I also frequently turned that one villain point into two or three for me. Had Seeds with titles on more than one occasion.

Though yes, that Fickle Fans is perfectly timed to save the heroes from destruction.

Maybe I’m reaching here, but is there a subtext to the hundred pies? It is the week of Christmas after all, in which many pies are consumed. The arena setting reflects the arguments leading to conflict around the dinner table.

Anyway, it was unpredictable as Kaargra usually is. (We’ll consider her Cousin Eddie in this case.) 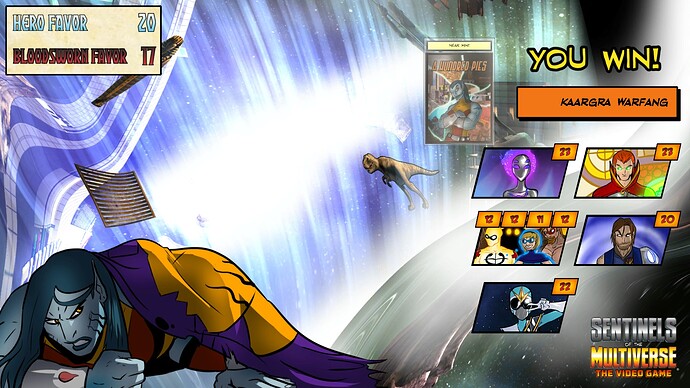 Second go round, as you can see. First made the mistake of not beating her back into her seat, and the Fickle Fans came out just in time to boost her to 20.

Was just about to lose the rematch, as I’d just ditched the Atlantean Throne Room and Idesa just came out to smack everyone and get the Bloodsworn’s last few favor. Luckily Orim was down to his last couple HP, so when the Strangling Roots went down so did he. That was the last point the heroes needed!

Maybe I’m reaching here, but is there a subtext to the hundred pies? It is the week of Christmas after all, in which many pies are consumed. The arena setting reflects the arguments leading to conflict around the dinner table.

The write up was a big hint too. 100 decimal places (maybe? I didn’t count). Just wondered if there was some double entendre there, or was I just projecting.

Lost out on my first attempt, and went down a rabbit hole unlocking variants and lost track of time over the holidays, so my second attempt was only good for a Good, with Kaargra herself accounting for one of the final two Favor points. A rousing battle both times!