Mint for 4/4 of the Ultimate Showdowns! (Unless they are planning a secret bonus level of OblivAeon…) Wraith was down and the others were actually fairly high for reasons below. If you are having trouble or just don’t even want to try Ultimate Iron Legacy without a plan, spoilers below might help.

Basically, I hid behind Meteor Showers. Thats about it. Wraith dropped and everyone else was well below 10 hp within a few rounds. I was unlikely to survive the next turn, and still hadn’t done any actual damage to IL. Then Meteor Shower came out. A quick refresh of his deck confirmed that he has no environment destruction, so Operation: Turtle was a go.

Once covered by the Meteors, I was just drawing cards and healing (Nanites, Maintenance Unit, Redeem) until I had the setup I wanted, namely Timely Disruption on Luminary, a charged Omni-Cannon on Bunker, and a Wrathful Retribution on Fanatic. I also had a charged Death Ray in play but couldn’t figure out how to use it properly so didn’t actually use it.

Once I was ready, Luminary destroyed his Superhuman Redirections with Timely Disruption, Wraith skipped her incap to destroy the Meteor Storm, Bunker Turret mode Panzer-Buster and Omni-Cannon did 25, and Fanatic Wrathful Retributioned for ~20 more to finish him.

All in all, I was super worried at the start, but once the meteors came out I knew I couldn’t lose. It was more of a matter of making sure the setup and timing were right.

Near-Mint for me! I used a similar strategy to A-Kat’s, but failed to properly math out Iron Legacy’s health gain from power usage. As a result, I came out of the meteor storm one round early, unloaded everything I had, and Fanatic… took him down to 1 HP (and then he healed up to 3.) And then on his turn he recovered his Superhuman Redirection, healed a lot, and punched us a lot, and we went down shortly thereafter.

Second round I was better at the math, and took him down easily.

Surprising everyone, including myself, I minted this one!

Wraith got down to 1 HP at one point, but she never dropped.

Unfortunately, my plan was, “Oh, yeah, I’ll just set up and then whammy him with an Omni-Cannon plus Wrathful Retribution.” Then I did that, and it didn’t work. Luminary wrecked the environment and Legacy’s setup, but all I did was flip him, which, admittedly, was better than his front side since he just kept hitting the devices instead of Wraith. But it took quite a lot more fumbling around until I was able to charge up the death laser and vaporize him. Definitely should not have taken that long. XD

It’s gonna be my first ever Fair if I can get back to it before the week is over. Basically did everything wrong the first two times. Adhesive Foam Grenade is NOT your friend on the first two rounds here. You’ll be nigh dead before the Meteor Shower can even come out! And Wrathful Retribution seemed so nice, until I realized there was still Superhuman Redirection in play…

I figure I can get nearly all of Luminary’s devices into play along with All According to Plan, then End of Days to wipe the board and ping Iron Legacy numerous times. Then depending on which of his Ongoings get shuffled back into play, Orbital Death Laser with full trash or Timely Disruption followed by Wrathful Retribution if need be.

Yeah, if the point of this whole month-long buildup (not that they weren’t awesome, but still) was to premiere the hardest version of the hardest villain, then allowing him to be nerfed by a single environment card was an odd way of approaching that.

I made the same mistake with Adhesive Foam, so Wraith ended up dropping, but that let her pull Omni-Cannon out of Bunker’s deck, and even losing two rounds of charge to the Pervasive Red Dust only meant that Bunker couldn’t one-shot IL from full. He had to have help from Fanatic’s 23-damage mega nuke, plus a couple points from Luminary after she Terralunar Translocated away all his Ongoings and both Meteor Storms. A super easy Mint with almost no effort, thanks to one of the most ill-considered cards in the entire base set, which no fewer than four villains (including two of the supposedly worst ones) are completely nerfed by.

It would of course have been a wipe without the Meteors, but in a way I feel cheated from having tried to honestly win an impossible fight, only to accidentally turn on God Mode through no credit of my own, and be left with a total cakewalk. Again, this takes nothing away from the coolness of the previous weeks, and I’m not exactly disappointed, but it sure wasn’t what I was anticipating.

I did really like the opening dialogue exchange between IL and his not-quite-nemesis. It rather makes me wish we could actually fight Legacy of Destruction somehow.

I did really like the opening dialogue exchange between IL and his not-quite-nemesis. It rather makes me wish we could actually fight Legacy of Destruction somehow.

Yeah, I guess this was the first time I’ve seen these two go head-to-head and not skipped the Start screen. I would accept even a variant that represents Legacy of Destruction. I know the art and quotes wouldn’t be a perfect fit, but still…

There’s the before, with the banter. 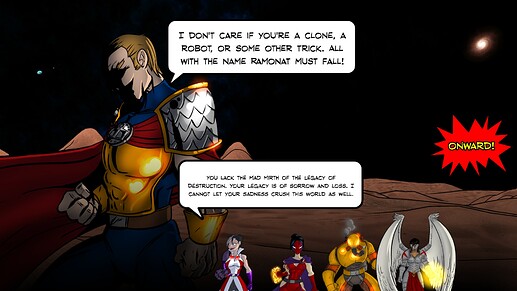 And there’s my after. Fine, not Fair. What was I thinking? 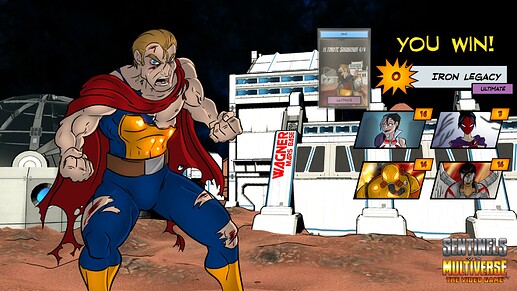 It still took some undo’s on the third try. I forgot about his built-in redirection on the flip side, and pinged him down below 20 as the devices were blowing up in the End of Days. Then the Death Laser got turned back on Luminary for 31 - D’oh!

A quick time rewind after that, and I left him at 21 then destroyed All According to Plan before clearing the rest of the board. Finally, ZAP!!! to put him in the negative.

No matter what happens in a Weekly One-Shot, someone will complain about it, so I don’t worry too much about that. Hopefully some people enjoyed the recent series.

For those hungry for Ultimate OblivAeon, you haven’t even seen Advanced yet, so patience =)

an OblivAeon game always takes like four times as long as a normal one, so by all means take your time.