Weekly One-shot #329: "One Is The Craziest Number"

Not an easy Mint this week, but a mint nonetheless. Went with my tried and true strategy of completely ignoring both Manifestations and environment targets (except for one attack on Venox so that a Backlash Generator would kill him and spare the party on round 3), just focusing fire on Ifny to take him out fast. Was left with the girls at 1 and AZ initially at 2, before Hoarfire healed him to 5; his gamble of playing Sub-Zero Atmosphere paid off, just barely, and his double Impale did a fair percentage of the damage.

Ra was targeted by the Reapers, but kept ahead of him thanks to multiple Staffs, assisted by Commodora. When he finally did die, it was from having too many Ocular Swarms which all popped to a Scorched Earth; only on the last such trigger did he die, therefore not finishing his Exterminatus on the entire army. LC finished what he started, though, pulling a Flintlock and Cutlass off Harnessed Anomaly, then playing another one from hand, all with a Figurehead in play.

Honestly, Luminary didn’t accomplish too much, in part due to a Crushing Cage; her biggest contribution was entirely nerfing a Whispers of Oblivion with a single firing of Regression Turret. She also profited quite heavily from Slamara, gaining a Commodora-reupped Brilliant Inventor which I believe brought out four Devices, though one of them was only useful for taking a highest-HP hit instead of one of the near-dead heroes. However, Slamara was also the reason for all those Ocular Swarms, so I suspect Ra will be having words with her when he wakes up.

PS: for some reason Bloogo always starts being a total jerk to the heroes (other than CC and maybe Unity) whenever Infinitor is around. I had no qualms whatsoever about taking him out with area damage. 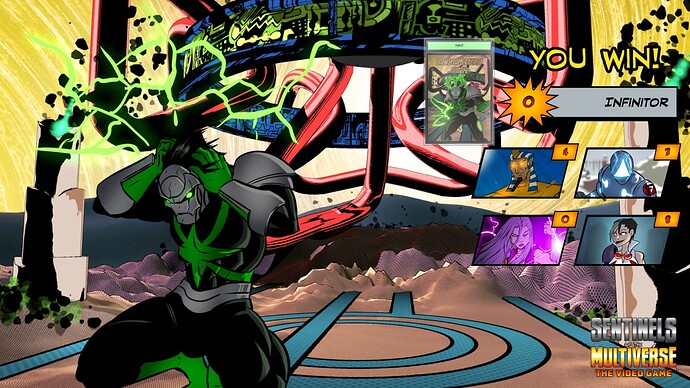 Thought this was gonna be a loss at first, cause the heroes started dipping down pretty low. AZ sat at 1 HP for a while, being basically powerless. He never got the fire module, and only got the cold one very late in the game. He did make probably the best use of Sub-Zero Atmosphere that I’ve ever done, though. Infinitor flipped on round 2 and got free destruction of one Manifestation each turn before it could act. I cleared the board out enough that I wasn’t being overwhelmed, then piled on Infinitor. Ra with his staff and a Paradoja Figurehead is a force to be reckoned with! Luminary used the Explosive Reconstructor with All According to Plan in play, nearly wiping a bunch of Manifestations, and bringing back 7 devices. That was fuel for her base power the next turn. Nigel ended up being taken out by a frickin’ shark with a laser on its head - okay, maybe more like a piranha-esque alien with an energy blaster but close enough!

A Mint for me too, but far from a comfortable one. I don’t think I lost anyone, but it was awfully close.

That is certainly not my experience. He’s decent against Infinitor because the latter doesn’t destroy things, but even then, he needs 3 turns of setup before he’s got all his Equipment in hand, assuming he even draws everything he needs. By then Infinitor will have nearly killed everyone, and AZ’s tanking power will be stretched to capacity just staying ahead of all the attacks. He’s a hero who has potential, as all of them do, but I’m pretty sure I see him doing nothing useful and/or getting killed well more often than the average hero.

Settled for a Near Mint, after getting sloppy the first time through.

Ra burned things down with his usual flair (flare?)

AZ was slow getting fully set up, but his Null-Point Unit was enough to offset his self damage while he got to work.

La Comodora kept her Cannon Portal out the whole game, and helped keep the team’s favorite cards close at hand.

Luminary had some difficulty getting set up, but excelled at distracting Manifestations and Endlings with low-hp Devices, and got a few good licks in with Saber Battle Drones.

Ended with all heroes in mid to upper single digits, with Ra dealing the final blow on La Comodora’s turn.

Hm, who did you put the initial Crushing Cage on?

The first time through I believe I put it on AZ, figuring his innate power was worded to evade the Cage’s effect - but the second time i dropped it on Luminary, and had the team blast it off before her first turn.

AZ killed it with Imbued Fire, Paradoja Figurehead, both Impales set on Infinitor, and Bloogo protecting him for a round!

What a wild ride.

Absolute Zero is most definitely the best hero.