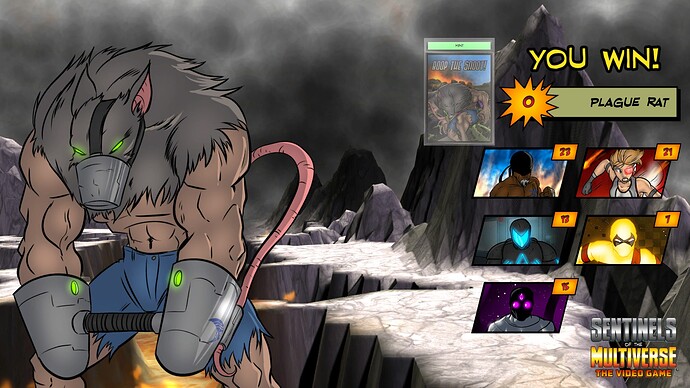 Fun random game, and proof if we needed it that the Handelabra team is up-to-date on The Letters Page!

Yeah, I’m disappointed I wasn’t able to ice up the whole rat before the end. XD

Nice and easy, and I’m up for that every now and then!

Big surprise loss on this one my first try. Nexus is supposed to be one of the friendliest environments according to the statistics project, and I’ve always felt that the rat was pretty easy on H=5 or even 4, so I wasn’t expecting any trouble. And I didn’t have any for the first two rounds, ignoring both Shadowy Ambush and Void Slave as cards that are mildly annoying but don’t normally do all that much… except, as it turns out, interact very explosively with the H-damage-per-destroyed-Infection text on the Rat, which I usually ignore.

So the Rat got the drop on the heroes while they were distracted by a ghost, and wiped out the whole party in like one second. For a game that I assumed I’d win, losing in this unexpected and cinematic a fashion was a far better outcome (and a great excuse to hear probably my third or fourth favorite of the villain victory themes). Since this is a Randomized Start, that unexpected loss won’t be set up to happen again, which is kinda too bad… it’d be neat to set up another game with very little O/E destruction or damage negation, and challenge the heroes to deal with the knowledge that this kind of “bio-nuke” is going to go off on turn 5 unless they can win before that.

I even enjoyed this week’s flavor text, silly as it was (this is not normally my jam, but what can I say, I’m in a good mood for once). My only very minor nitpick is that I would have had Zero say “I’ll ice up…” Rather than “I’m icing up…”; as Christopher observed the other day with his “cellar door” reference (a much-enjoyed nod to one of my Top 25 movies of all time), the phrase has a certain musicality, and any change to those five words is going to be a bit off key. But that’s an extremely tiny complaint in what is otherwise a Perfect 10 weekly.

Well, I’m not waiting any longer to get that whole rat iced up. I’ll try to delay my gratification next week, but not this time; that rat owes me a Near-Mint, and tomorrow isn’t soon enough.

I hadn’t noticed before, but yeah, there’s the potential for some devastating interactions between this environment and Plague Rat; Void Slave and Ravage alone could wipe a team with little warning or recourse!

Despite the appearance of a Void Slave, my game was uncomplicated by such interactions, in part because Writhe’s Grasping Shadow-Cloth kept PR from playing anything at all for a critical couple of rounds.

Near mint confirmed! Writhe pulled off a Shadowy Ambush of his own, on the Savannah Nocturna of Bright-Burning Taiga no less, dealing the lethal blow with Concealed Assault for 4 cold, plus another 3 psychic and 3 Infernal if I had needed them. Before that, AZ was a superstar with Thermal Shockwave and the Taiga giving him extra healing power, and before that, Driving Mantis and then Jack Handle made Fixer his usual Rat-smashing self. That poor snoot never stood a chance of escaping unbooped.

Side note: one odd interaction that came up in this game was Medico getting to Immunize himself thanks to Driving Mantis. It makes perfect sense that the dead Mister Fixer’s haunted corpse would interact strangely with Medico’s weird healing powers (my phone autocorrected that to Mexico’s, which is kind of appropriate, given how many of us USicans go down there to escape the out-of-control medical prices we’ve been putting up with since Obama). But the fact that this interaction would have worked equally well for normal Fixer, that’s harder to explain. This is why I always wish the rules were more complex… not because I don’t want unexpected things like this to happen, but because I want them only to happen under exactly the right circumstances.

Mint with the only thing of note being I think the rat only played ongoings. I don’t think there was ever a not-ongoing card played in my game, which made it rather… easy to take him down…

Well that’s the upside of randomized start …we all get something different. The downside is not getting to recreate the awesome start my first game was off to, but hey, it all worked out in the end.

I iced up the whole rat.

This wasn’t a difficult Mint in my game, but since it’s a random start, the difficulty will vary wildly. In my game, I saw Plague Rat use his Infectious Bite while the Void Slave was out, which means the infection was immediately destroyed, but that made PR bite everyone for 5 damage, so – ouch on that front.

Still, this is a fantastic hero team. With Zero and DW Fixer in play, there’s two heavy hitters, and Rat isn’t bad about equipment/ongoing destruction, so they can actually get moving. With Tach providing heavy card-draw and ongoings for Fixer to eat, plus Medico’s healing and Writhe running interference, I didn’t even get hurt that badly (except for Medico, but like… yeah, that’ll happen, and he was able to Regenerate at just the right time to stay in action).

Ended up with Writhe bringing Plague Rat down to 1, so I just had my other heroes pass so Zero could throw the final strike and ice up the whole rat. Boop!

Threw everything I had at him in the final round, Absolute Zero iced everything but the snoot, and Doctor Medico performed the boop de grace (probably with some kind of broad spectrum antibiotic)

I hate this so much XD

He must’ve had to try extra hard since his non-hero target damage options are limited.