This week; Prime Wardens Fanatic, Luminary and Dark Visionary take on The Matriarch in Insula Primalis.

This game was. Chaotic for me. I’m still not certain how I pulled off the win here. Especially after making a ton of avoidable mistakes in the match. Note to self: doing these at 5 in the morning is probably not the move.

One such error I made was halfway through the match deciding that using a Brain-Burn to prematurely shuffle The Matriarchs trash into her deck, and thus flip her, was big brain strats. It did not go to plan.

I barely hung on for the last half of the match and when all looked lost, managed to pull it off with a Wraithful Retribution to bring her down. I sometimes forget why Fanatic is one of my favourite characters and then a game winning End of Days/Wraithful Retribution reminds me. 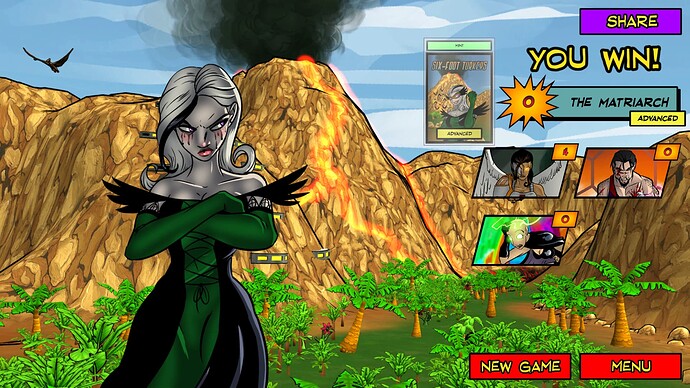 Rrr… well, I didn’t win, but I think I figured out how to win. This is one of the least enjoyable weeklies ever, because you kind of can’t really do anything other than stand there getting beaten up on until the “players cannot win” rules turns itself off (in this case meaning she flips and Muninn is no longer indestructible). The random fact that the Mask is a Relic is particularly infuriating; after one honest loss, I blew my chance at a Near Mint by not reading End of Days to realize that it wouldn’t do anything on round 1, besides kill a Fowl.

Had the deck order been less unfortunate, the game wouldn’t have been so painful; no Aegis and no Cocoon make Homer something something. The critical ingredient to making the long game winnable is that Visionary must have lower HP than Fanatic when you End of Days. Otherwise, as happened on my first try, the retaliation damage will kill you long before the birds all die. But once you get rid of everything once, most especially Muninn, one Regression Turret will do most of the work of suppressing Mattie while you rebuild your Saber Drone army, fire off a few orbital death lasers, and spank the obnoxious little brat.

I do give credit to the name on this one, as with or without Turmoil and Prophetic Vision (which will almost invariably send away worse things, like T-Rex and River of Lava), the Velociraptor Packs were an extremely large presence in this match. I don’t recall when I last saw three of them; they didn’t actually do all that much, just pop the fowl at inconvenient times, but that was mostly to the party’s benefit anyway, as they were simply piling up. Not the ideal turkey time, but a decent excuse to break out the gravy.

Mint, but it was a nasty one.

My strategy was basically as follows:

I never got Matriarch to flip, and I got lucky in a couple of places; Dark Visionary flipped Munnin to the bottom of Matriarch’s deck at a moment when it was valuable to me, and I was able to focus-fire Huginn enough to have the velociraptors just keep chewing him. It was definitely a close win - Fanatic was down, Visionary and Luminary were both at around 10 HP (although Luminary had a pair of defense barriers out to help a little.)

Near Mint! And I actually had fun with this one. Dark Visionary was able to prevent Matriarch from ever playing more than 1 Fowl (until the last round), and the volcano even took her out!

To make myself a liar, I did in fact go back and followed these suggestions, and came out with a near mint, no heroes lost, and maybe one bird played ever? gj friv, tyvm

Did she stay on the front side the whole time? I’m assuming you had Visionary bury Huginn so there wouldn’t be 2 DR and wreck Twist the Ether. How did you protect the Turret since it’s the dealing the damage, not Luminary himself? Just neutralize the Carrion Fields and Matriarch once you can pierce her defense, then blow up the fowl that would target the Turret?

I don’t know where people were getting the idea that you could flip her early, since Brain Burn just buries the trash. I can’t think of a way to force a shuffle on her, and if you let it play out to where both cohorts are alive you’re toast.

Did she stay on the front side the whole time? I’m assuming you had Visionary bury Huginn so there wouldn’t be 2 DR and wreck Twist the Ether. How did you protect the Turret since it’s the dealing the damage, not Luminary himself? Just neutralize the Carrion Fields and Matriarch once you can pierce her defense, then blow up the fowl that would target the Turret?

Yep, she stayed frontside the whole time, and I kept focus-firing the carrion fields; it wasn’t hard to blow them up with the extra damage on the table, and with the Matriarch weakened the damage for popping birds wasn’t too bad (until the Obsidian Fields came out, but by then I was close to ready to finish things off.) I did lose a couple of turrets over the course of the game, but with Fanatic giving Luminary an extra two topdecks a turn I was able to pull a lot of devices out in rapid succession.

And yeah, it did require me to bury Huginn; if he’d come out things would have gone wrong in a hurry.

I’ve gotta try a third time. I had been avoiding offing the birds in fear of the retaliation damage, but that just leads to death by a thousand pecks for devices and everyone. At least she only targets one hero.

I guess stacking the environment to pull out all the raptors and have them take out birds for you is good, too? Better at least than lava or an eruption. And Obsidian Fields can help pierce the raven shield, but it’s also gonna mean Fanatic burns herself out that much faster.

A “Fine” ending my 5 mint streak

I took the advise of brain burning the mask on turn 2 and putting twist the ether on the turret.

I burred her 2nd Horrid Cacophony and later Huginn then with some environment stacking and letting the raptors munch at nanobots to no avail I was able to take her down before she played the mask or Cacophony again.

I kept all the obsidian fields out and let the volcano kill Fanatic (although she did a better job at killing herself than any old volcano could) I maxed Sacrosanct Martyr every turn after she played it with obsidian fields.
Visionary MVP with strategic card removal putting raptors and obsidian fields and lava (for luminary) plus every play of suggestion stalls for another turn with darken the skies bringing back progressively less birds. or maybe MVP volcano as it hit her twice and could have hit another time if it came to it.

Third try still bust, as I mistimed the deck manipulation and Huginn hit the table. I should’ve quit at that point, because it spiraled down from there.

Fourth attempt got the Fine, though. Buried Mask as suggested, buried Huginn. Either buried the other Horrid Cacaphony or it happened before I played Ongoings. Fanatic made Luminary discard whenever possible, except maybe one time with a maximized Martyr combo. Luminary sacrificed a device to play All According to Plan, and Visionary slapped Twist the Ether on a Turret that I guarded with my life. Stacked the environment to be something like Raptor, Lava, Raptor, Raptor, (maybe another Lava?), Obsidian. Most of the damage came from Luminary with a 29-point space laser while his deck was empty. The boosted Saberbots were also able to chip away, and the Matriarch’s feathers were finally plucked by Visionary with a Mind Spike!
Final HP: Fanatic 2, Luminary nearly full, Visionary about half.

Just barely near minted thanks to this advice, finishing off with a 30 damage orbital laser right after she’d played almost all her fowl.

In view of real life busyness, I might just decide to take a Good on this one, for the first time of any non-OA game since I started following along. Using the advice on this thread, I managed to lock Maddy down and kick the crap out of her for numerous turns, and thought I was even going to keep Fanatic alive and have Luminary at or near full HP… and then I got sloppy and allowed the Mask to come back out for a round and that was pretty much that. Still, no flip, no Hugin, and Matty down to 8 HP at the end… I think that’s close enough that I don’t need to bother sitting through the whole rigamarole again.

Just squeaked in with a last-minute Fine, largely owing to a 26 point Orbital Death Laser to take The Matriarch down into the teens - the remaining hit points the team whittled down 1 or 2 at a time, until a Volcanic Eruption finished her off. Fanatic sacrificed herself to help Luminary power up his devices and Visionary to manipulate Ms. Corvus’ deck, just enough to keep Huginn off the table, and to prevent the Mask making a return appearance until the final round.