Really cool name and flavor text today. Neither has anything to do with the game, but they’re neat.

Whew, this was a close one. Blew Oblivion and Arcane Explosion in round 1 to clear the board, and then in like round 3 or 4 I’m like “Wth happened to my health”, and soon all the heroes were down… except Nightmist in mist form with 4 HP. Thanks to DW Harpy, I could actually do damage without solidifying, so I made sure to take out Ermine before she could…um…steal my… ability to turn into mist. I hadn’t mathed out that the Big Bomb in the environment deck would have killed her anyway, and that I was better off making sure Bugbear also failed to survive. Thankfully he didn’t manage to deal +9 damage to a nonhero target, and while I was worried about the Carbon Adept, he died in a car crash, and Biomancer soon afterwards.

Once Plague Rat was the last surviving foe, I could have just kept whittling him down, dealing 2 damage a round while dead Bugbear healed him by 1, and eventually I would crash his car. But I wanted to do something with my 20-card hand, so I dropped out of Mist Form to start healing with Starshield Necklace and Master of Magic, while the Amulet and a Stunt Double helped me avoid any hits. It got a bit hairy, so to speak, but eventually I was confident enough in my HP total that I could risk a Heedless Lash, which more than sufficed for the win.

This post reminded me I needed to try this one again and I got wrecked again! This time with only Nightmist in Mist Form alive, despite all attempts to the contrary. Mister Fixer had a Driving Mantis at the start that I swear wasn’t there in my first play-through, though, and that went a long way toward keeping him up.

Tried a second time, and still a failure. However, I lost in a way I have not ever before. 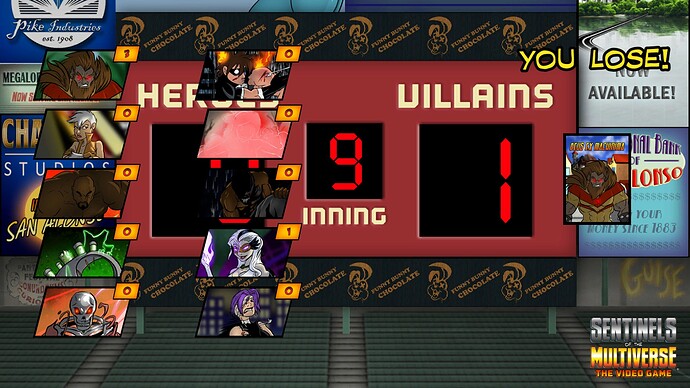 Thought that was a neat touch.

Man, I hope the other Dark Watch variants’ powers are improved in Definitive Edition as much as those of Setback and Expatriette that we’ve seen. Bitter Strike makes DW Fixer my least favorite variant in EE, hands down.

Bitter Strike is often frustrating, but it’s also incredibly fair, really changes how fixer plays, and is massively powerful against either villains who never destroy your stuff or those who destroy ALL your stuff ALL the time. He kinda sucks in the middle range, but that’s all part of game balance. I would definitely call him a very solid promo, though I do get a little tired of how often he shows up. I often wonder whether the randomizer picks “random variant of random hero” instead of “random hero variant”, as the promo of a hero with only two versions seems to be more common than one specific promo for a hero who has three of them.

I would only use DW Fixer on purpose with someone with a lot of fodder (Benchmark, La Comodora) or someone who could actually benefit from him smashing everything he sees (Stuntman).

That said, I think my problem here was not icing up the whole rat. Focused on Ermine, then Biomancer. Plague Rat went crazy a couple rounds and just about took everyone with him.

I should probably have Setback destroy Blood Scent on the first turn and leave Constant Prattle out. I think the milling is what got down to Mist Form, because I never drew it this time.

I found it useful to stop the rat from getting iced. And getting rid of Prattle allows for some big blows (and destroys Blood Scent soon enough anyways).

Edit: Just realized I misinterpreted your use of icing up the whole rat. I found it useful to prevent the RevoCorp boys from icing up the rat, as in stalling him and preventing him from doing anything. I decided to let him free.

I destroyed Blood Scent, but he does Unpredictable Powers quite early, so really I should probably have taken out Engine of Destruction.

oh man, I don’t think I’ve ever seen this!

Need to try it out for myself sometime.

How’d you keep everyone alive? I find Dark Watch to be the worst of all teams for mitigation and recovery. And what was your villain takedown priority?

Well priority number 1 was hit as many as I could with as much as I could, while preventing Plague Rat from playing additional cards. I even decided to choose to hit everyone with 3 damage and villain targets with a 2 during one of my Oblivions, so I could get rid of the guys that play Plague Rat cards.

If I had a single ping of damage in a turn (like Mr Fixer redirecting), I targeted Fright Train. If I knew I would be doing multiples instances of damage, I pinged Biomancer first. I mostly left Ermine alone, besides using a low instance of damage to get rid of her immunity.

I think the key is rushing damage as soon as possible, including letting Plague Rat run loose on his allies. You should be able to get off at least both Oblivions and a powerful Arcane Explosion.

I went back at it with this post in mind, and actually what did it was destroying Constant Prattle at the start of the game instead of Blood Scent.

And also not focusing on Bugbear, which is my usual strategy for team games with him.

I actually took out Biomancer first, shock of shocks, and though they were all at low single digits, I didn’t lose any heroes. Won during the environment turn during the third strike of Bottom of the 9th. Literally would have lost the game otherwise probably!

And the crowd goes wild!

Yeah, I’ve tried like 5 times now to the point where it was becoming unfun and I had to walk away. I guess I’ll go back this weekend and give it another shot. Maybe I need Bottom of the Ninth out to help the heroes. I just really can’t stand Bugbear when there’s barely a way to prevent his damage and healing. Grease Gun and Hoist Chain would be the only things I can think of in this game, if I could get to them. Problem is if I focus on him first, Plague Rat and Fright Train run out of control and wreck everything else. And if I take out the others, he’s punching at like +5 and healing nearly back to max each turn.

This was literally my last action. There’s no point in aiming for Bugbear when he’s going to heal it all back. And yeah, Constant Prattle is what I decided on too.

Nightmist is his nemesis for a reason. If she’s highest HP and in Mist Form, he goes hungry forever. If there’s another hero alive to deal damage, you’re golden. If not, you get three bonus powers per round, so Astral Premonition to stack his deck, getting rid of any damaging one shots, and Amulet of the Elder Gods to make him hit himself for lethal before he can heal.

Victory has thus far eluded me as well - I need to come up with some more effective tactics, as i tend to be in single digits across the board by the time I have eliminated the first villain.

Yeah, I don’t know where anyone’s getting Mist Form or keeping enough cards in hand to redirect with the Amulet. Tried yet again, destroying Constant Prattle the first turn so Bottom of the Ninth came out. Then it was a couple Oblivions, Arcane Explosion, some redirecting with Mantis style. Expatriette’s biggest and almost only contribution was a Hollow Point shotgun blast that knocked Bugbear down into the maybe-we-have-a-chance range. Finally down to Fixer and Harpy each at 4 HP, with two outs on BotN. So was about to lose again that way, but Fixer went into Overdrive and smashed Bugbear to clinch the win!