Well, at least the third or fourth most annoying, and second most overused in these challenges, of the Environments has flawlessly beautiful music. Almost makes me enjoy losing to this ridiculously overclocked Challenge Mode for a normally pathetic villain. (I’m a bit sore because, of the ten or twenty Weeklies I still have yet to beat, Challenge MBB is already one of them, so I have to play him again anyway after beating this one.)

Ultimately I lost because of Krakens more than because of Blade. Though it certainly didn’t help that part of my strategy involved having Haka use his Taiaha to smack Fanatic on turn 1, just to try and make her better at Wrathful Retribution… which I then spent on turn 2 for just 6 damage, thinking I could easily Reclaim From The Deep it, because obviously I would have no trouble using the two Prayers of Desperation in my hand to draw replacements for the three cards Wrath discards. Wasn’t counting on Consider the Price and Phosphorescent Chamber to force discards. (I regretted having Tempest and Fanatic spend their initial turns just drawing cards, but in retrospect it was a good move.) So yeah, Fanatic died and that whole strategy didn’t really work out… although, to be fair, it was certainly Xtreme enough.

My other severe miscalculation was thinking that if I could just keep Legacy alive, he could soak the Death Ray forever with Next Evolution. Two problems with that; one, I keep forgetting that MBB destroys your stuff when he flips, so I needed to hold the Next Evo in hand… and two, of course, Legacy didn’t survive. Next time, I had probably best go the Ta Moko/Die Hard route for Haka, rather than trying to race the Baron. Challenge MBB is a rare case where Flesh Repair Nannites isn’t a complete waste of his turn, but rather a serious inconvenience which almost justifies not even attacking him until after it happens. Oh, and make sure you don’t waste your Ball Lightning, assuming you can manage to keep M’kk Kraken-Kibble alive somehow, for long enough that both of the devastating Ongoings can be taken out.

Overall, though frustrated, I’m pretty happy with this unexpected loss. Not certain I’ll be able to Near Mint this one, but I probably have a decent chance.

“Don’t waste Ball Lightning” feels like the greatest piece of advice anyone could give for this one. The Backlash Field is bad, but the Living Forcefield just makes Blade so much worse. Considering it just won me the match on the third try! :B

If you spend a lot of time setting up rather than dealing damage, you can weather his flip pretty well.

Yeah, I gotta say what hurt the most was losing 7 cards to his flip. Keeping out the Phosphorescent Chamber with Inspiring Presence and Motivational Charge meant Legacy never kept any cards in his hand, but there was enough damage to overcome the Nanobot Power Armor and Legacy made a fairly decent healer. Tempest only needed the one Ball Lightning timed to take out both Ongoings. Never made it to a Leaking Room or Devious Disruption like my first game where I kept slogging on hoping upon hope to get another Wrathful Retribution. Obviously, I did not. The second attempt went much better, however. 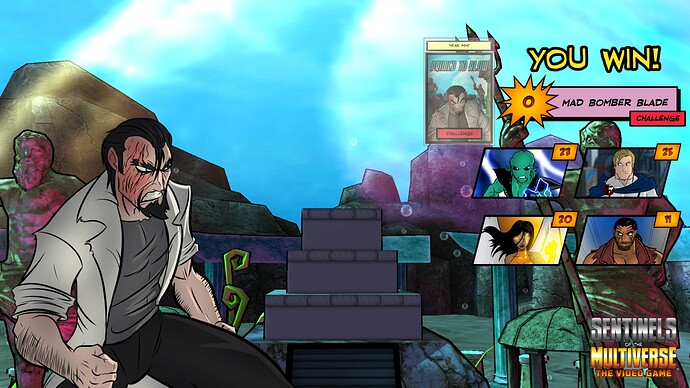 Managed a Near Mint, after losing the damage race on my first attempt. Blade’s flip only took out four cards, though that was bad enough, and Phosphorescent Chamber on top of Inspiring Presence blunted his challenge advantage; Shielding Winds helped keep the Kraken from eating everyone. All the heroes except Fanatic ended up in double digits, while she was at 8 HP, allowing her to play Wrathful Retribution a second time for 20 points of damage to bring the Baron down.

In my first game, I thought I calculated everything out and so I had Legacy Immune to energy damage and skipped Fanatic’s turn so she could get more cards. Then Haka hit, where I though Blade would flip, but he only got down to 1! This single error cost me that whole first attempt… (well, maybe that and using Ball Lightning first because I wanted to deal damage)

But on the second go, I was able to fix the error of my ways and even lined it up just right so that the Kraken finished off Blade! Overall, good times.

Near-Mint for me, because of my sloppy fingers.

On my first attempt, everything was going well up to the flip; I used some damage blocking to get enough Ongoings out to weather the flip, and then blew up Blade. Unfortunately, on Blade’s first turn post-flip, he chained Hasten Doom and Consider the Price of Victory, which dumped six cards into the trash. This wouldn’t have been so bad, except that a few turns later I accidentally pressed ‘fire’ instead of ‘energy’ when giving Legacy immunity, and Legacy took ten damage to the face the same turn that Tempest bit the dust.

That was enough to take Legacy below Haka, which meant that the next thing that happened was that Haka died, and Legacy wasn’t able to tank everything alone.

On my second play, I was more cavalier with Fanatic and more cautious with Tempest; they both still died, but I was able to win with Legacy and Haka both at 8-10 HP. If Blade had dropped his second Devious Disruption I would probably have lost.

Got my Near Mint, though only just barely; Legacy pulled off Next Evolution to resist Energy damage forever, and even lucked into using a second copy to resist Toxic Seaweed during a round that also got a couple Hasten Dooms. The rest of the party went down, Tempest first to an unexpected Kraken (the expected Kraken had finished off Blade’s first side, and then later triggered Aegis of Resurrection to bring Fanatic back up from 3), and then the other two in a Devious Disruption, and Legacy was left at 2 HP…but fully set up and holding enough dakka to finish Blade off, after Fanatic’s two Wrathful Retributions had taken about 50 of his 70 combined HP. Haka loved using Die Hard to protect whoever was in danger at any given moment, defaulting to Legacy despite his high HP because of nemesis. The Baron’s flip took out only four cards, and two of them were Dominions, enabling Legacy to keep Inspiring Presence (though that was a mistake, as he was holding another copy). All told, a fairly easy but by no means trivial victory.

Mint on this one. I don’t remember exactly but I think Atlantean font of Power forced Fanatic into playing Divine Sacrifice on environment turn 3 or 4 which lead to massive damage on her and she survived with like 3 HP so she let out a massive Wrathful Retribution and flipped the Baron super early. the 10 heal healed his flip and since he targets max HP legacy and Haka tanked the rest of the game and fanatic (much to her dismay) lived to see the end.