Absolutely destroyed by this one on my first attempt, and thought for sure the second would turn out no better. Knyfe gets extremely violent with Progeny in both directions, so unsurprisingly she’s the first casualty both times; likewise, while OX and Benchmark both have the ability to stall Progeny forever if they get fully set up, neither had the right opening hands to get up and running before running out of HP. I remember OX lasting quite a while in the first game, getting Plating shenanigans up and running to very good effect, but took too much damage in the meantime, with Benchmark being pasted before he could accomplish anything. The second attempt went the other way, with X being totally demolished in no time at all, while a single-digits-HP Benchmark was one round away from becoming effectively invincible when a sudden blitz of boosted attacks from Progeny managed to put him down.

In either case, Bunker was the last man standing, and with bonus armor from OX on top of his Heavy Plating, he was hard for Progeny to touch most turns. Had it not been for O4 destroying Equipment, the fight would have been pretty easy; as it was, in game 1, OX had used Bio-Engineering Beam for several rounds, with bonus uses from Benchmark, to keep the Environment under control. Lacking that edge in game 2, the Environment got totally out of control, and I figured Bunker was doomed… but at the last moment, Bunker healing himself and a bit of extra damage on Progeny from KNYFE in the early game managed to leave them both at 5 HP, at a critical moment when a 4-point Techno-Pursuer was deciding who to techno-pursue. At the last second, the Partial Omni-Drone chose to classify humanity as the lesser evil, and a bedraggled Bunker watched as two Drones finished off the awesome goofy flying head.

I remember I had a much easier time with this than I expected, mostly because of the environment. I lost KNYFE, but she always goes down in Progeny fights. I also got him to flip back to his front side with all the healing the team had!

One of my heroes was more helpful than others…

Always, unless a quality healer or tank makes it their mission to keep her around. Like I said, if Benchmark had gotten up to speed faster…

Same here - the other heroes dropped one by one, but O-X held out to the end, even sacrificing his own synthetic body to eliminate the threat to a humanity he was once sworn to destroy!

Were you all piling on from the get-go, or forgoing damage to try to setup first? I found that as long as Blight was out I was just shooting myself in the foot and left with not many options. Which decks did you Timeshift the most? I tried K.N.Y.F.E. a couple times and just ended up discarding her deal everything energy damage cards. I’ll have to see if I have time to go for Near Mint before the next one is out.

If I would deal at least 1 net damage in the turn, I was dealing damage. Omni-IV also made it so throwing away some cards was actually helpful.

Normally I would say that out of these heroes, Bunker is the one to Timeshift, but that was very not true in this game (3x Upgrade Mode shudder). With Reset in the mix, OX’s results are ironically impossible to predict; my use of Timeshift on himself turn 1 didn’t go well, but ymmv.

What are you talking about? Slip Through Time?

I don’t recall what I did, but whatever it was, it oughta be in this video: Twitch

IIRC the first turn Timeshift with no Reset produces Disruptive Flechettes. 2 damage to Progeny which he immediately heals, plus someone discards. On the other hand, Reset may net you the extremely useful Bio-Engineering Beam, but I think it also shuffles away the Technological Advancement which you need to get some Elemental Plating, so that you can tank and use healing beams. Pulling that off is probably the way to keep OX up, but I never managed it.

Ohhhh, his innate power. For some reason I thought you were talking about the card Slip Through Time. Fairly certain I used that on Benchmark quite frequently. 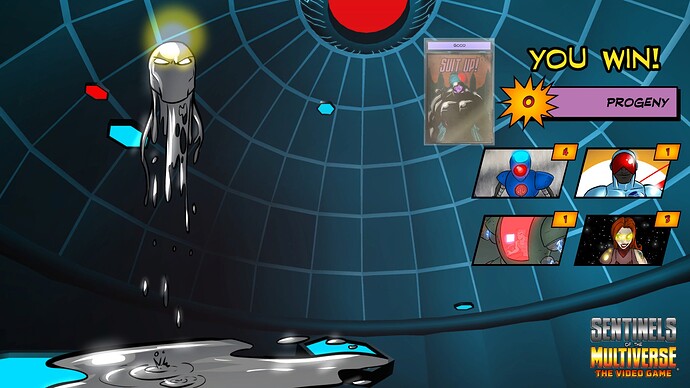 Got it with everyone up, barely! Gratuitous use of the undo function and the Intervening Path Calculator to thank for that. Finished just a few minutes too late to get the Near Mint, though. O-X’s power mostly went to Benchmark, with K.N.Y.F.E. getting it once for her Kinetic Neutralizer.