This week’s one-shot has a title I assume is meant to invoke Spirit Island (and maybe Horizons thereof). It’s Akash’Bhuta in the Court of Blood vs. Mr. Fixer, Dark Watch Setback, The Scholar, The Wraith, and Dark Visionary. Rather drawn out fight as Akash tends to be. 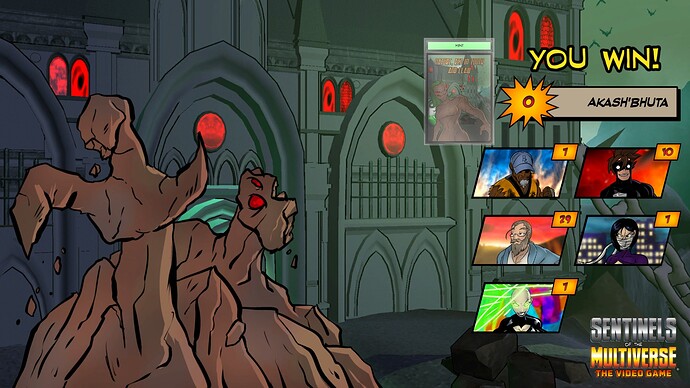 Limited opportunities for healing here, especially if you don’t dispose of the Unhallowed Halls posthaste. I doubled up on Flesh to Iron, eventually slapped a Twist the Ether on Akash, and made sure to take out the Living Rockslides ASAP. Setback and Scholar had enough boost to pep the heroes back up and keep anyone from going down. A vampire ended being the downfall of Akash.

It was a good Akash fight. I ended up losing Setback (twice!) but otherwise finished with few problems.

Whoof. It’s not every day that Scholar invincibility proves inadequate. More to come as soon as my phone stops having a glitch which makes message editing impossible.

A long, close match - all the heroes except Visionary did pretty good damage, with Setback and the Scholar getting the biggest wallops in. Mister Fixer bought the team a couple of pain-free rounds, and Jack Handled everything in sight. Wraith threw all the things and delayed an Entomb for a round with a Throat Jab. Visionary stayed on deck control most of the game, avoiding or delaying many of Akash’s nastiest one shots and Ongoings. Unfortunately, Slim was clipped by a Living Rockslide in the final round, so he wasn’t up to see Dame Katarina deliver the final blow - an unsettling victory, to be sure!

Setback and the Scholar getting the biggest wallops in.

That’s surprising! Did you have a big stack of Unlucky tokens and a big hand to discard?

My damage came from Fixer and Wraith mostly. Scholar was the tank, absorbing Entomb for the team and only getting tickled by it. I never used Grease Gun or Throat Jab because I wanted Akash to hurt herself. Visionary was there mostly to stack decks and destroy Entomb. And Setback destroyed Entomb and the nastier environment cards as well.

Yes to the first, not so much to the second. Setback had High Risk Behavior in play most of the Game, and enough tokens to get his HP back into the teens when Silver Lining was triggered…both times!

Scholar’s main damage came from Grace Under Fire and Get Out Of The Way; I wasn’t as successful in stacking Mortal Form To Energy as I had hoped, but with enough targets, GOOTW/MFTE is a beast offensively.

Wraith and Fixer are probably more consistent with less work, but Setback and Scholar have some of my favorite high-impact plays.

It’s not surprising that Scholar was crucial to this win (which conveniently took exactly as long as my morning commute, despite my fear that I wouldn’t be done by the time I had to start working). What is surprising is that he accomplished this feat with no Flesh to Iron. Instead, massive amounts of healing plus triple Energy Form and Twist the Ether made him the ultimate lemon cannon, and Riveting Crane plus Pipe Wrench ensured Akash was vulnerable at all times, except when literally all Equipment was being repeatedly destroyed.

Dark Visionary is a borderline liability in this match; stacking decks in a game this long tends to result in a massive pile-up of bas stuff when the decks start to run out. She can take out Entombs with Mental Divergence, but otherwise she mostly didn’t contribute too much other than the Twist the Ether. Wraith did okay, despite constantly losing her stuff; mostly she was important for being the only source of Environment destruction apart from Setback, who does it with a distinct downside.

My earlier loss was interesting because it reflects on a situation I’ve had in a previous game; I thought I had uploaded the log of it, but apparently not, or else I have no idea how to find it. It was a situation where a brambled Scholar was the only one left, but remained sufficiently invincible that he could eventually grind out a win by letting Atlantis kill the softer target. I tried for that again after losing Setback early on, then having a giant Eruption which took out the girls and left Fixer barely alive for like two rounds. Alas, while the vampires freeing Scholar was a theoretical possiblity, it turned out to be less likely than a Rejuvenating Entropy turning his Iron-Coated Iron* back into flesh. He had high teens HP, but against multiple Rockslides and Phalanges, he still cratered in one turn. Fun to picture him being held fast for several hours, then just suddenly going “sblortch” (points if you recognize that sfx).

Mint with everyone at decent HP.

I went with a tank Scholar drawing fire while Setback built up a truly ludicrous number of Unlucky tokens and then unloaded damage repeatedly into the enemy, with Fixer in the background providing Jack Handle support boosted up to do some decent damage. Dark Visionary largely controlled the environment, making sure that targets got stuck on top when I was ready to kill things and then vanished when I wasn’t, and Wraith alternated between AOE damage and mild deck control.

The high point was Setback passing 20 unlucky tokens while gradually eroding his own HP, hitting a couple times a turn for 8-9 damage each time, then using Cause and Effect to hit Akash for 27 damage, then Silver Lining himself back to full health off the self-hit.