The Ennead, apparently deciding turnabout is fair play, is raiding tombs in the Final Wasteland, and Chrono Ranger has called upon The Harpy, Void Guard Doctor Medico, Termi-Nation Absolute Zero, and The Hunted Naturalist to help him put a stop to their pilfering! Will they achieve a final victory, or will their efforts be wasted?

What does it mean when six Ennead members face off against The Hunted Naturalist, having incapacitated all his teammates? Bad news for the Ennead!

Honestly, when an especially brutal round took down most of the heroes, with two-thirds of the Ennead still standing, I was all but resigned to settling for a Near Mint at best - but with his incapped allies providing abundant power uses and card plays, Naturalist soon collected his entire deck into his hand, and hammered the entire pantheon into the ground using Bestial Shift, Primal Charge, The Predator’s Eye, dual Cornered Beasts and Resilient Hides, while gaining HP every round and redrawing every card he played almost immediately. What an absolute beast!

Oh, so that’s how it happened for you, too?

I was absolutely floored by this one, went through the same resignation into wide-eyed “I think I can do this!” you did. This was a perfect showcase of just how disgustingly powerful Hunted Naturalist is.

“How am I supposed to win? I’ve got one guy and they’ve got seven!” Just play Bestial Shift, it’ll be all right.

Here’s my VOD for the next week if anyone’s interested: Twitch

Everyone besides Naturalist got down to about 3 HP for me. Not even From the Brink and Regeneration could save Dr. Medico. He was the first to go, and I was about ready to throw in the towel then. Kept at it though, with only his minor incap healing each turn. Lost Harpy not long after. By that point Naturalist had all his rhino cards out plus Environmental Allies. With help from Harpy giving an extra power he could use all three forms every turn and draw enough to keep cycling Indomitable Force nearly nonstop. Absolute Zero was able to ice his whole rat back up to full health, and Chrono-Ranger managed to climb back up to double digits while keeping enough bounties in play to whittle down the rest of the Ennead. A dead Set was more help to the heroes than the villains, with three extra cards per turn. Don’t remember the exact takedown order except Osiris was first so I could actually have cards to play. Nuit soon after to get rid of their damage reduction. Shu was last since he posed the least threat. Good thing for cold damage from AZ and the Masadah from CR. Otherwise Naturalist would have struggled to punch the wind.

Whew! Been a while since I was properly challenged; I put up a good fight, but was a little careless, not fetching Jim’s Hat on turn 1 and screwing up big time on the third Naturalist turn, resulting in his death due to non-Rhino tanking. After that I lost about one hero a round, but managed to take down Nephthys in a single round from full, along with Osiris (the first to fall, taking three infuriating rounds), Nuit, and nearly Shu. I am confident I will succeed in the rematch, but it’ll make me sweat, and that’s awesome.

Naturalist is surprisingly good at punching wind. Or rather, biting it with toxins.

It was over 20% at least at that point. It’s best for phone batteries to get that low before recharging…

Mint! I almost lost, but it would have been entirely my fault.

I lost Doctor Medico midway through thanks to some unlucky “hit lowest hero” stacking that I didn’t fully calculate leading to multiple critters taking bites out of him right before the Ennead blasted him. Then I stacked some tanking on the Naturalist and let him take hits, which happened the same turn that the Ennead blew up the environment and tried to hit everyone for 6 damage each. Naturalist took 16 damage, which was not great, but I was hanging in, and I was set up to heal Naturalist substantially on his turn.

Then I forgot that I had that card still in play and had Absolute Zero try for a big cold/fire heal and blast trick, which redirected 15 fire damage directly into the Naturalist’s face instead of giving AZ a great harm/heal coda to his ice blasting.

The Naturalist went down hard, leaving only three people in play. A couple of turns later, I lost Chrono-Ranger, and then Harpy. It came down to Zero just blasting people and self-healing over and over and over, and luckily I was able to trim the Ennead down before they wiped his equipment.

That’s a different outcome with only AZ left standing! Yeah, he would’ve been toast without equipment though.

Still want to see if anyone can make it with the whole team alive. I know Tefnut and the cryptids are big bullies picking on the lowest HP target, almost always Dr. Medico. If only Environmental Allies was not buried so deeply…

Also got a mint via Naturalist BS. Those extra powers tho!

Regeneration is crucial when it comes to keeping Medico alive; I also enjoy Universal Donor plus Experimental Medicine. It becomes tough for anyone other than him to lose any HP!

I generally trust the cryptids to finish enemies off for me. In my game I almost failed to kill Nuit in one round, but a NJ Devil popped out and did her in for me.

If only AZ could find his Transducer…

Oh man, I actually did WORSE this time somehow! But it was awesome, I’m definitely going to keep cracking at this one all week until I get it.

I guess there’s no point in uploading multiple screenshots of losses against the Ennead. It’s too bad they don’t list the HP totals for them and show which ones you knocked out, but the artwork is already too small to properly display their triumph, so I suppose it can’t be helped. With an Ipad, though, it would be really fun to show them to the left of the screen…if not their portraits, then maybe just their hieroglyphics. 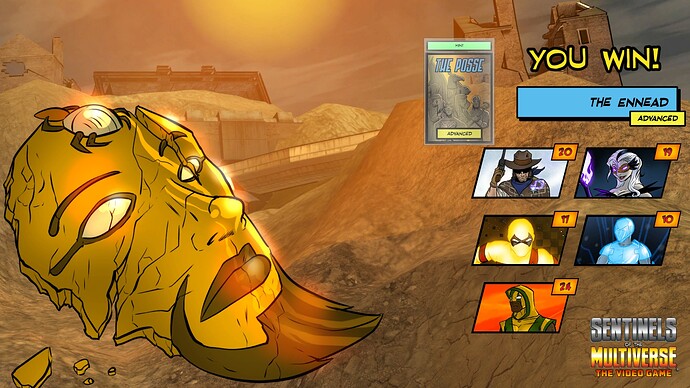 There we go! Replayed just to see if I could keep them all up. Got dicey with Medico dropping down to 1 HP once, but never triggered On the Brink. Kept out enough Ongoing/Equipment for fodder so I never really lost any of the good stuff. Oh, and got Cold Snap out this time due to Set’s incap topdeck. That went very poorly for the remaining Ennead when combined with Violent Shivers.

Okay, technically I didn’t have all my heroes up at the end…

… but I think this effectively counts as the team winning with no losses.