(sorry, there's no non-rules place for me to put this, so I put it in the Tactics rules area)

I got a head-start making accessories for Tactics during playtesting, and it’s time to start posting them up so others can use them if they’d like.  I’ve updated my Tactics site with three files:

If you don't have the minis but would like to have something 3D to push around the table while playing, maybe give my 3D standups a try.  You cut them out and glue them into a pyramid shape.  The file includes all the characters from the base game and Uprising, as well as companions and other things like Ra's tornado.  Also includes a 3-hex oversized Omnitron-V.

These are just like the tuckpacks I made for GSF - they're slim envelopes you can use to keep each character's power cards separate and organized.  Makes it really easy to grab a character's cards from the box at the beginning of a game.  The back of each tuckpack has the info from the quick-reference cards - game phases and common actions.

During playtesting it drove me nuts to deal with flat tokens all the time, especially for things like Ambuscade's traps which you had to flip over (not always easy to do with a small, flat scrap of paper).  These, you print out, cut out, then fold the "arm" back over to form a kind of a handle (which sort of makes the trap look like a land mind).  When the trap is triggered, you can easily lift the trap by the handle to see if it's a decoy or the real thing underneath.  Now that we've got punchboard traps in the official version of the game, my 3D traps are less necessary, but I'm posting them up anyway in case someone's interested.

First, I want to say thank you, Spiff, for all the hard work you do in making these awesome accesories for >G's games.

Second, I have to ask the obvious question: Will the envelopes hold sleeved cards?  I plan on sleeving mine at some point soon.

Sorry, I have no idea if they hold sleeved cards.  I think they will, but I'll have to confirm it.  I'll let you know.

Good news, the tuckpacks do fit cards in penny sleeves quite nicely.  I'll update my site to make that clear.

Mr. Spiff , are we supposed to glue the two open sides of the tuckpacks?  For some reason that feels less safe than gluing the folded flaps on the card game tuckboxes.

No glue needed as they're currently designed. You just cut them out, cut a slit along the white line so the flap has a place to be tucked, fold them in half along the long axis, then slap some tape along the side and bottom to seal it up.

Mr. Spiff , are we supposed to glue the two open sides of the tuckpacks?  For some reason that feels less safe than gluing the folded flaps on the card game tuckboxes.

Mr. Spiff is his father.

I've updated the tuckpacks file in the following ways:

1) I've updated the instructions for constructing the tuckpacks (so my dad doesn't need to explain it over and over ;)

2) I've now included tuckpacks for the Uprising characters as well as the base characters.  Note, if you're sleeving your cards, you're going to want to print two copies of Operative's tuckpack, one for her power cards and one for her poison cards.  All of her cards will fit into a single tuckpack if they're unsleeved, but not if they're sleeved.

4) I've included a regular old card box just like my SotM card boxes for all the units in the game - all the Citizens, dinosaurs, all the various turrets, etc.  There are a lot of them so a box seemed the best option.  There are two box files included, one that fits unsleeved cards and one that fits sleeved ones.

Who wants 3D terrain for Sentinel Tactics?  Well, you're getting it anyway, sort of.  I only have buildings completed for tile #5 of the Megalopolis map so far (the one with the cathedral), but I plan on completing the full set eventually as time allows.  I figure it's more valuable to have a complete set for one map than to have bits and pieces from both Megalopolis and Insula Primalis, so I'll be focusing on completing the Megalopolis set first.  If this assumption is incorrect, let me know.

As I complete pieces for more tiles, I'll add them to the .zip file available on my Tactics site.

Please note that playing Tactics with 3D terrain will likely be a complete pain in the keister if you're using Omnitron-V.  And no, I still haven't figured out how I'm going to handle the Freedom Tower. 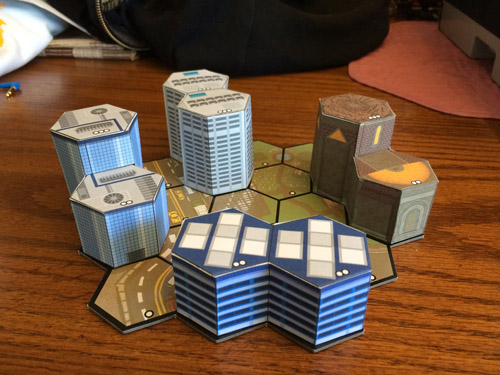 I have an idea for Omnitron V.  How about just make three Omnitron pillars?  The player would have to remember to keep them together, but otherwise, it could work...

I decided to tackle one of the more difficult tiles today, so I went for Megalopolis tile #6, the one with the star-shaped building in the center.  Nailed it!  Tile #6 is now included in the 3D terrain file. 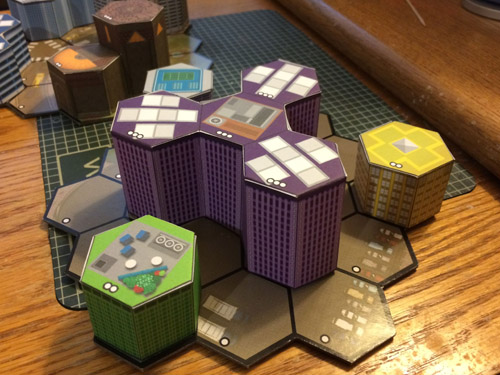 (plus, I love to get proof that someone besides me actually ever prints this stuff out, so thanks for that).

Do you think you could make generic BW templates for the elevations 2-4?  I'd like to have a single set for both sides of the tiles, so I don't really need the indivual details or conjoined tiles as much.

Let me make sure I understand the request.  "BW" probably means "black and white"?  You're asking for a set of elevations with no art whatsoever (besides the dots indicating elevation, I assume), one-hex each (no conjoined multiples), for each of the elevations 2, 3, and 4, yes?

If the answer is yes, I can pretty easily put that together.  The downsides to those would be (a) ugly plain white columns all over your maps, and (b) I've found that stacking multiple one-hex terrains next to each other will work, but they're more susceptible to disruption than the larger conjoined terrains are.  By that I mean that if you bump the table, each of the individual terrains bumps against each other and in an instant, your map is a mess.  Larger conjoined terrains are heavier and there's typically nothing adjacent to each one to bump against, so they're more stable.

If I understand your request correctly and you're not deterred by those downsides, I can put this together for you.  Just let me know.

I assumed as much in regards to the flaws, but with most of my gaming meet ups involve myself biking along, space and flexibility are my primary conser. And yes, I ment black and white, as I just have a black and white laser printer for this. Once you finish you megaopolis set, I may make a secondary set for at home games, as they do look cool.

You got it.  Next time I sit down to work on the terrain, I'll toss together a blank set like I described.

Blanks for each of the elevation have been posted in their own folder inside that same terrain file on my site.  Enjoy.

Please note that playing Tactics with 3D terrain will likely be a complete pain in the keister if you’re using Omnitron-V. 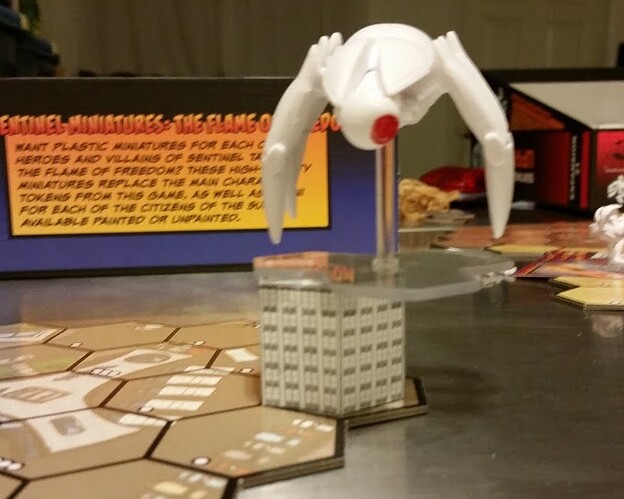 ....
It turns out Omnitron can balance on one hex, as long as the support stick is a few mm from the edge of the building!  Also, Spiff's awesome buildings are sturdy enough to hold it up, even with my crappy prototype printed on cheap paper with no penny taped to the bottom yet.

Thanks very much for your game-enhancing stuff, Spiff.  I'm really looking forward to printing out the 3D terrain once you get all the Megalopolis tiles finished.